To say it’s been an off-year for big oil would be an understatement. Shockwaves of volatility and lower energy demand have rippled through global markets. An added threat is the increasing role of renewables in the energy mix as wind and solar companies continue to gain market share — and oil companies lose it.

In an effort to get on board with addressing climate change, Royal Dutch Shell (NYSE:RDS.A) (NYSE:RDS.B) and other European majors like BP, Total, and Equinor are ramping up their commitments to reducing carbon emissions. For Shell, this means a restructuring that is expected to eliminate 7,000 to 9,000 jobs by the end of 2022. Here’s what that could mean for investors. 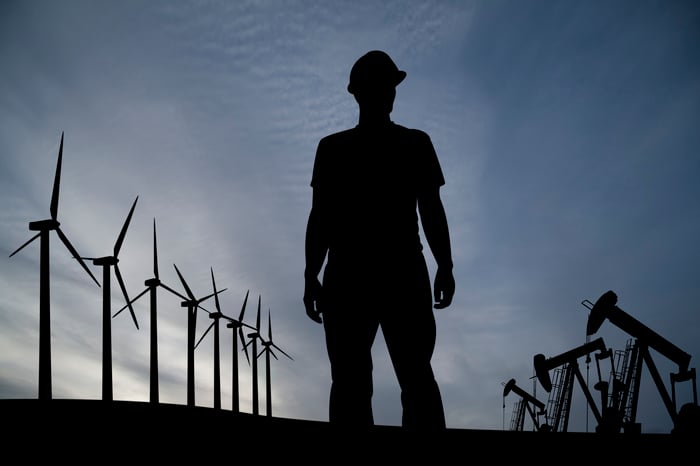 Shell’s job cuts are just the latest unsettling news for Wall Street’s least-loved oil major (shares of Shell are down more than any other integrated oil and gas company so far this year). 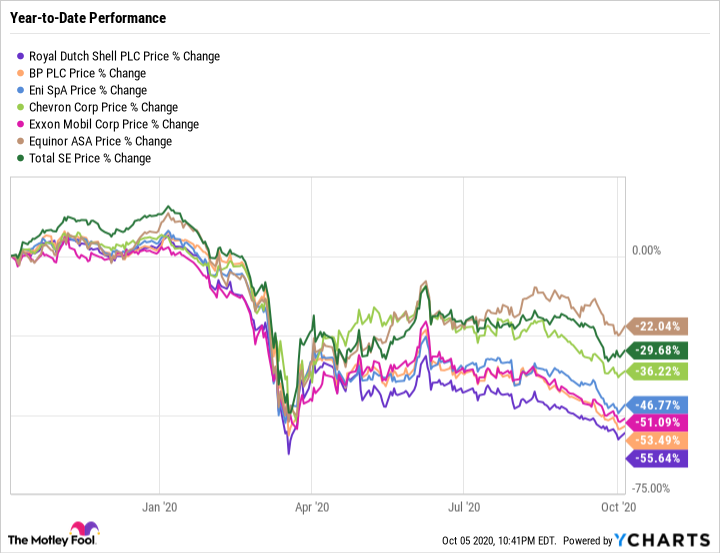 In April, Shell cut its dividend by two-thirds, cut spending by 20%, and suspended share buybacks. Its first-half adjusted earnings were 60% below the year-ago number. Weak second-quarter free cash flow (FCF) and poor results have strained the company’s balance sheet.

Shell’s net total long-term debt is now the highest among its peers. 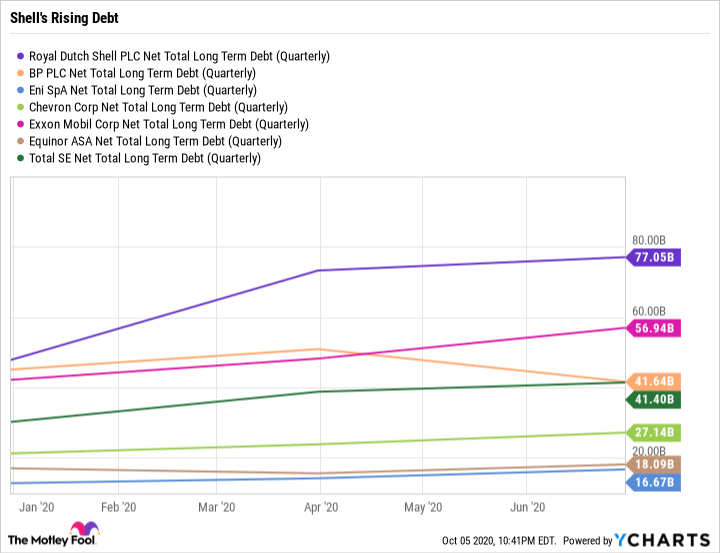 In a recent interview posted on Shell’s website, CEO Ben van Beurden provided details on Shell’s restructuring and what its path toward net-zero carbon emissions by 2050 will look like:

…a company like Shell has a choice. It can choose to produce oil and gas with the lowest possible emissions. Or it can say: “If society wants to get to net-zero emissions and we really want to be an integral part of that society, then we need to get to net-zero as well.” We, Shell, have decided to go on the second, bigger, mission.

Shell says it plans to reduce emissions across its business, including oil and gas. However, the company made it clear that by 2050, it will mainly sell low-carbon electricity, low-carbon biofuels, and hydrogen. Carbon capture and storage (CCS) and carbon-neutral liquefied natural gas (LNG) will also play a role. Although Shell has been investing in these lower-emission sources of energy for some time, van Beurden said that “it all needs to accelerate.”

The battle plan goes something like this. Shell’s upstream business will focus on cash flow, not barrels of oil produced, which will provide the funds needed to invest in new industries. Refining capacity will also decrease, with a transition from oil refineries and petrochemical plants to biofuels. Shell’s goal is to reduce its number of refineries to fewer than 10. The company had 55 operational refineries around 15 years ago and interests in 15 refineries at the end of 2019.

Shell’s integrated gas business looks to be one of the few segments that should continue to grow as Shell stays focused on LNG. Since 2018, integrated gas has grown to dominate Shell’s portfolio and proved to be the main contributor to its impressive cash flow generation between 2018 and 2019.

Rationale behind the job cuts

Shell’s reorganization will come at the cost of 7,000 to 9,000 jobs by 2022, which would be around 8% to 11% of its total workforce as of the end of 2019. Just as job growth, for the right reasons, can indicate that a business is growing, job cuts tend to be a red flag that growth is slowing. Shell’s case is an exception, in that the job cuts are part of a bigger strategic shift to help the company become more profitable.

It’s no secret that growth is slowing for Shell. Aside from the company’s poor performance so far this year, van Beurden noted in late July that although he believes the gas market and industrial oil demand will come back, he is uncertain if overall oil demand will ever recover to pre-COVID levels.

Considering that Shell plans to produce less oil and refine less oil, it’s not too surprising that the company would decide it doesn’t need as many employees, although it could hire more down the road as it expands into new markets. Shell expects that the job cuts will result in $2 billion to $2.5 billion in annual savings, the latest saving initiative for a company that has been aggressively looking for ways to cut costs.

Shell’s savings should help the company mitigate losses in the short term, but a shift away from its core competencies in oil and gas toward emerging markets will likely mean that true long-term growth is several years away.

Given the poor performance of Shell’s business and the company’s intentions of moving forward toward a lower-carbon future, the decision to cut jobs is probably the right course of action, though it is painful for employees. Plans to scale down oil production and refining capacity mean that the workforce will scale down with it. Shell’s short-term future seems to be focused on saving money, whereas its long-term intentions aim to put it on the side of history that transitions away from fossil fuels.

The job cuts are a natural consequence of Shell’s restructuring. They indicate slowing growth in the hopes of a better future. A successful transition could mean that Shell becomes a leader in carbon-neutral fuel sources and hydrogen, and a strong player in renewables. For now, a rising debt level, poor earnings, and an oil company that is showing less interest in being an oil company indicate that Shell’s stock could be headed for a bumpy ride over the next few years.