Not everyone enjoys waking up to or being woken by birdsong. For some the transition from night to day, sleeping to an awakened state, silence to cacophony is best if it is close to seamless. They would prefer their days and lives to be free of harsh or unexpected interruption. […]

Not everyone enjoys waking up to or being woken by birdsong. For some the transition from night to day, sleeping to an awakened state, silence to cacophony is best if it is close to seamless. They would prefer their days and lives to be free of harsh or unexpected interruption. Smooth.

It is not impossible for an individual to craft the world around him/her in ways that are more or less ideal. Life however wrecks the best laid plans, brings down preferred architectures and that which is placid now can without notice become tempestuous.

We rarely get to a land called ‘Calmness,’ simply because it’s not marked on any map, there are no buses running to and from it, road signs are absent and most of all because we don’t know what it looks like, even if we know about it.

And so we long for silence and curse the noise, dream of easy passage and lament a jarring reality.

Maybe we have thought of silence all wrong. Maybe we look for it in the wrong places. Maybe we just don’t use the filters that allow us to separate dark from light, truth from falsehood etc. Maybe we trip because we are looking for it in a distinct universe as a stand-alone entity.

Silence is not a stranger and neither is it a strange place. Perhaps we should acknowledge it as unrecognized companion, invisible but eminently present accomplice, approving bystander and, ultimately, the substance that shapes our conversations.

In the heat of an argument, we could pause. Silence will immediately offer perspective, give us things in their true dimensions. When undecided, when anxious or fearful, silence will give space for reflection and will open a pathway to lead us away from emotion to reason.

It might sound ridiculous to suggest to someone that the most beautiful silences actually reside between words or even syllables or suspended between embrace and let-go.

We read little or too much and in both degrees of engagement leave things out, inflate what’s read and by and large through misreading and exaggeration, through illiteracy and trivializing lose the faculty of noticing things, silence for example.

Life doesn’t lend itself for neat carving where the carved elements can be neatly organised and labeled. Birds don’t chirp as per a roster. Things come in mix and melt. Things reveal themselves in silhouette and reflection are wait for teasing apart.

There’s a high note captured by a flute, rising above the elegant exposition of a full orchestra. It’s not heard or if indeed is heard is typically dismissed simply because outliers are considered lesser citizens in the Nation of Comprehension.

That’s silence. Yes, a note which has or represents a sound and yet, in contrast to what else is out there and of course whatever is prominent, is nothing. Metaphorically speaking.

We try too hard, maybe? Our gaze is too intense, perhaps? We are mis-trained to notice the noticeable and believe the unnoticed is non-existent, maybe?

We see the faraway mountains. We are duly thrilled. The grain of sand also has a story as compelling, but this we don’t get to hear.

Silence. Constant companion. Co-conspirator but never named. Silence: a witness whose evidence is disregarded. Silence: right there with you when the last bell calls. Shares our birthday but doesn’t blow any candles. Dies with us and doesn’t get mentioned on headstone.

Greece Presented to US Travel Agents at ASTA’s Virtual Event

Thu Sep 24 , 2020
Greece’s tourism offerings were presented to US travel agents during the annual global convention of the American Society of Travel Advisors (ASTA). The event was originally scheduled to take place in Washington but, due to the Covid-19 pandemic, it was transformed into a virtual event and held under the name ASTA […] 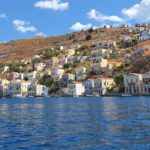