Are you flying for the first time since the pandemic began? Here are a few steps you can take in advance to ensure you don’t get stuck at the airport.

Mysty Stewart has. At a casino hotel in Stateline, Nevada, she ordered a drink – and received a lecture instead.

“It was weird,” says Stewart, who owns a marketing agency Windsor, California. Instead of sitting at the table, she took her drink to her room, where she consumed it maskless.

People have been weirded out a lot lately. As travelers leave the safety of their homes this fall, they’ll find plenty of pandemic travel rules that make sense – and a few that don’t. Sometimes it’s hard to tell them apart.

You’ve probably heard of the mask rules on planes. Airlines and social-media savvy passengers have turned the expulsion of passengers who refuse to comply into a public spectacle. Apparently these rules aren’t reciprocal, as one Allegiant Air passenger found out when he asked a flight attendant to wear a mask – and was kicked off the plane for his impertinence.

But that’s just the half of it.

Steven Richardson recently flew to the United Arab Emirates, where no hand luggage may weigh more than 11 pounds, for health reasons.

“I can’t find any logic in that at all,” says Richardson, a pilot who works for JetFinder, a private jet charter company.

Equally confusing: The rules seem to change by the minute. As of now, they allow you to carry up to 15 pounds on the plane. But tomorrow, who knows?

While we’re on the topic of airlines, here’s a rule that didn’t make any sense to Jerry Tilley, who works for a cruise line in Oslo, Norway. During the pandemic, he noticed that airlines cut their meals in economy class but continued to cater full meals in business class.

He suspects the virus had nothing to do with that rule.

“It was merely an excuse to cut service in economy class even further,” he speculates. 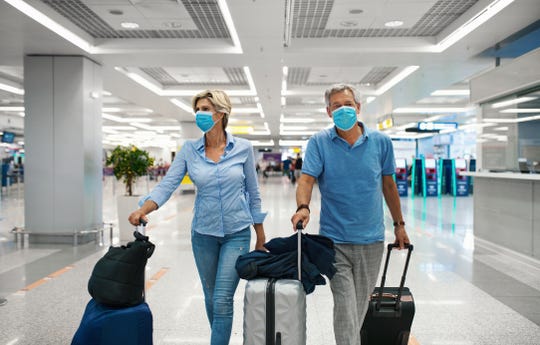 Six months into the COVID-19 pandemic, we’re all accustomed to getting our temperatures taken. But some travelers report odd policies they’ve encountered that have little to do with the virus. (Photo: gilaxia/Getty Images)

Deborah Gellis, a frequent traveler during the pandemic, says hotels have some of the most inconsistent COVID-19 policies.

“Some hotels check your temperature when you check in,” she says. “Some don’t.”

Some hotels allow their cleaning staff to service rooms. Others won’t enter your room.

“The hotel gave us a garbage bag to leave outside with our dirty towels. Then it replenished them with fresh towels. We had to empty our own trash,” recalls Gellis, a travel advisor with Ovation Travel Group.

The epicenter of weirdness, when it comes to hotels, is Las Vegas. Some properties have thermal cameras at entrances that screen anyone entering the building, including employees. If you’re too hot, you go home. There are also crowd police, who prevent large groups from gathering in one place, which is bound to happen in a place like Vegas.

Not all of the rules make sense

A lot of these rules make sense. For example, no one needed to explain the reasons behind closing those all-you-can-eat buffets. Pretty much everyone agreed that was a good idea.

But a few rules are real head-scratchers. David Leiter, a photographer based in Bali, visited a beachside cafe last week and noticed a new pandemic rule: You must wash your elbows before entering.

“I assume this was to avoid cross-contamination from people resting their elbows on the tables, of course, but I have to wonder how often anyone touches their elbows throughout the day? In any case, it was interesting and raised an eyebrow, at least,” says Leiter, who publishes a blog about his travels.

But that raises  a question: How many of these rules are there for our safety? And how many are there just to make us feel safe?

Travel is as risky as it’s ever been this fall. It’s hard to tell which rules are based in science and which one are based in superstition. And while travelers may question some of them, they have to follow all of them – at least for now.

Reality check:  What it’s like to stay at a Hilton, Marriott and Hyatt hotel during the COVID-19 pandemic

The most common pandemic travel rules

Travel companies have adopted lots of new rules since the pandemic, but they have significant limits.

Wearing a face mask. Airlines, restaurants and major hotel chains have face mask rules, and they’re often strictly enforced. What’s less clear is when you can remove your mask. Can young kids skip the face covering? Can you go maskless when eating or drinking? Do you have to immediately replace the mask after taking a bite, or can you leave it off for the duration of the meal? Experts say when in doubt, ask.

Social distancing. Whether you’re at a hotel or waiting in line to check your luggage, the travel industry has a six-foot rule. Enforcement hasn’t been as rigorous as the face mask rule, probably because there are lots of exceptions. In a noisy hotel lobby, how do you get close enough for an employee to hear you and still maintain social distancing?

Cleaning. Various hotels and travel companies have rolled out new programs that promise a more disinfected travel experience. These initiatives are meant to reassure guests, but there’s still one thing travel companies can’t do: control guest hygiene. Also, there’s no way to verify if a room or airline seat has been thoroughly cleaned – you just have to take their word.