TOKYO — On Sept. 12, ahead of the ruling Liberal Democratic Party (LDP)’s leadership election, then Chief Cabinet Secretary Yoshihide Suga understated the number of coronavirus infections involving people using Japan’s “Go To” travel subsidy scheme, saying that seven users had contracted the virus when in fact there were at least 20.

In an online debate that evening, Suga commented, “Only seven people contracted the coronavirus through the use of the ‘Go To’ travel scheme,” and added, “We learned that (the scheme) doesn’t cause that many infections.”

However, upon contacting the Japan Tourism Agency (JTA), it emerged that the “seven people” Suga was referring to were restricted to those using the “Go To” travel promotion program in one of two ways, and did not include the 13 people who contracted the virus while using the program the other way.

Moreover, different public health centers take different approaches on whether to publicly disclose facilities that have seen infections. And there are expected to be people infected with the virus who have not told others about the fact that they had traveled. As the JTA says it cannot precisely state the number of people infected by the virus due to travel, there is a possibility that the number is much greater.

The validity of the new prime minister’s understanding of the state of coronavirus infections is therefore being brought into question, and the Mainichi Shimbun deems Suga’s statement that there were only seven infected people to be “misleading.”

When appearing in the online debate with other candidates running for the post of LDP president, and therefore prime minister of Japan, Suga stated that the travel campaign was necessary for the rebuilding of the Japanese economy, and that “7.8 million people had traveled using the scheme in a month and a half, and seven were infected with the coronavirus.” He then went on to say, “It showed us that if we take the measures that need to be taken, the coronavirus does not spread that much.”

At a news conference the previous day as chief Cabinet secretary, Suga said, “Until now, a total of at least 7.8 million people have used (the Go To campaign), and only seven infections have been identified.”

The 20 infected people that the JTA was aware of as of Sept. 10 were the seven people who paid for their travel at a discounted rate prior to them actually going on their trips, and the 13 people who paid upfront for their travel expenses at the regular rate and would be receiving reimbursements later by reporting their travels to the JTA. In addition, there were 16 people who traveled without using the “Go To” program who were infected with the virus. The number of people who used the travel scheme in which travel expenses were discounted in advance was approximately 7.8 million total — this is the population that Suga is talking about. The total number of people who used the program under the reimbursement method had not been tallied at the time.

Minister of Land, Infrastructure, Transport and Tourism Kazuyoshi Akaba told a Sept. 18 press conference that 11 people had been infected with the coronavirus as of Sept. 16 through the travel scheme, similarly excluding people who had gone through the travel campaign’s reimbursement route.

Commenting on Suga’s exclusion of people utilizing the reimbursement scheme, a JTA official explained, “In the case of reimbursements, travelers are users of the campaign in the broad sense of the term, but we don’t know whether all of them will end up seeking reimbursements. If we are asked about the number of ‘Go To’ travelers who became infected with the coronavirus, we give the number of people who got discounts prior to travel.”

The JTA official also said, “Public health centers’ responses differ from center to center, and we can assume that there are people who will not inform others that they had been traveling. Thus, we have no way of knowing 100% who has been infected through travel.” At the chief Cabinet secretary’s meeting on Sept. 11, Suga qualified the figure he gave as one “as far as we know.” But in the online debate, he did not.

The travel program raised concerns about the spread of infections at tourist destinations right from the start. A link with the “Go To” travel campaign has not been confirmed, but as of Sept. 10, a total of 57 people at accommodation facilities and 11 people working at travel agencies have been confirmed to have gotten infected with the coronavirus.

Fri Sep 25 , 2020
By Tangi Salaün and Dominique Vidalon PARIS (Reuters) – France opened an anti-terror investigation after two journalists were stabbed in Paris on Friday near the former offices of the Charlie Hebdo satirical magazine that was attacked by Islamist militants in 2015. Prime Minister Jean Castex, who rushed to the scene, […] 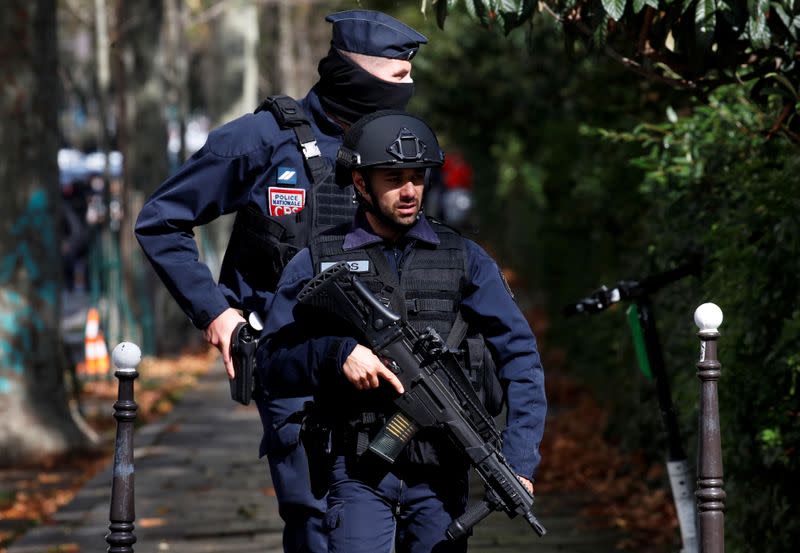