“IN the North, at least.” I was glad to read this phrase in Jeneen Interlandi’s “The Pandemic in Fall and Winter” in the Sept. 20 New York Times.

It was inserted, parenthetically, in a prediction that COVID-19 cases will increase as cold weather drives people indoors. Here in our part of the world, of course, the opposite is mostly true and it’s nice to see that fact acknowledged.

In Savannah, it’s the summer weather that drives people indoors. Or to the beach.

So many people have been flocking to Savannah’s beach this summer, the City of Tybee Island is keeping lifeguards on duty through an unspecified date in October. 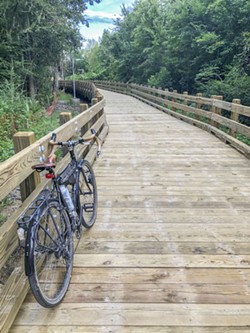 Construction of Phase 2A of the Truman Linear Park Trail, which runs from Lake Mayer Community Park north to DeRenne Avenue, is nearing completion.

Lifeguard season typically concludes in September, but Interim Fire Chief Matt Harrell told WTOC-TV they will stay in their stands past the end of the month because, “the beach is consistently crowded.”

On Sept. 21 the National Weather Service in Charleston reported a reading of 59 degrees at the Savannah-Hilton Head International Airport, the lowest temperature since May 14. That’s sleep with the windows open weather and reminded me of the spring, the mildest I can remember in nearly 25 years living in Savannah.

The delightful weather coincided with the beginning of the pandemic and a significant increase in people seeking the physical and mental health benefits of walking, running, biking, and rolling.

Even as restrictions were lifted and the brutal heat and humidity descended on Savannah, people kept at it, though maybe a little earlier in the day or later in the evening. The Robert Espinoza Running Trail in Daffin Park remains as busy as I have ever seen it.

Bike Walk Savannah intends to quantify what seems to be a sustained increase in recreation and active transportation, and is seeking volunteers to assist with its twice-yearly bike and pedestrian count, which continues through Oct. 10.

“These counts help the City, County and Coastal Region Metropolitan Planning Organization plan for and create safer places for people to bike and walk. By doing these counts twice a year, we are able to help document patterns in behavior and support the construction of things like buffered or protected bike lanes and separated paths,” said Caila Brown, executive director of Bike Walk Savannah.

The organization has undertaken bike and pedestrian counts at locations around the county for almost a decade, providing valuable data on walking and biking patterns over time. Brown said the count earlier this year immediately revealed a trend.

“In our springtime counts, we noticed that a lot of the usual suspects — people who have biked the same route to work, or students going to class — were absent. Instead we saw families out riding bikes or walking around their neighborhood, enjoying the outdoors,” she said.

“Many people have returned to working from their offices, while other essential workers have never left, so I assume that our fall numbers will reflect a higher rate of obvious commuters. But I hope that with the cooler weather rolling in, Savannah residents will continue biking, walking and rolling around their neighborhoods. It’s one of the best times of the year to do it!”

Since the spring, Savannahians have at least one more place to ride bikes, whether for transportation or recreation. New bike lanes on Wheaton and Liberty streets from the Truman Parkway to Montgomery Street provide a much-needed link between downtown and neighborhoods to the east. The new bike lanes were completed in April, with little fanfare.

One of the most highly anticipated local mobility projects, Phase 2A of the Truman Linear Park Trail, is nearing completion. The multiuse path links Lake Mayer Community Park with DeRenne Avenue, and is being constructed by Chatham County.

The City of Savannah is seeking funding for the next phase, which will extend the trail north from DeRenne Avenue and connect with the Police Memorial Trail.

The completed trail will provide an ADA accessible, off-road/shared use path, and includes lighting, cameras and emergency call boxes.

While some may regard the trail as a recreational amenity, it will also provide a significant transportation function, providing connections to everyday destinations. For instance, a Memorial Health employee who lives as far south as Montgomery Cross Road could commute to work on the trail, using Reuben Clark Drive to access the hospital campus from the east.

“Along with the two parks, this trail will connect multiple neighborhoods and provide a wonderful place for recreation, separated from traffic. It also will create a major north-south corridor that will help people commuting by bike,” Brown said.