A Sydney socialite has branded Western Australia premier Mark McGowan a ‘fascist pig’ and a ‘hillbilly’ for tearing families apart with his tough border closure.

Kristin Fisher, who runs a beauty salon in the ritzy seaside suburb of Double Bay, hasn’t seen her family on the west coast for eight months.

She is among tens of thousands of Western Australians who have been separated from their loved ones since Mr McGowan sealed off the state on 5 April. 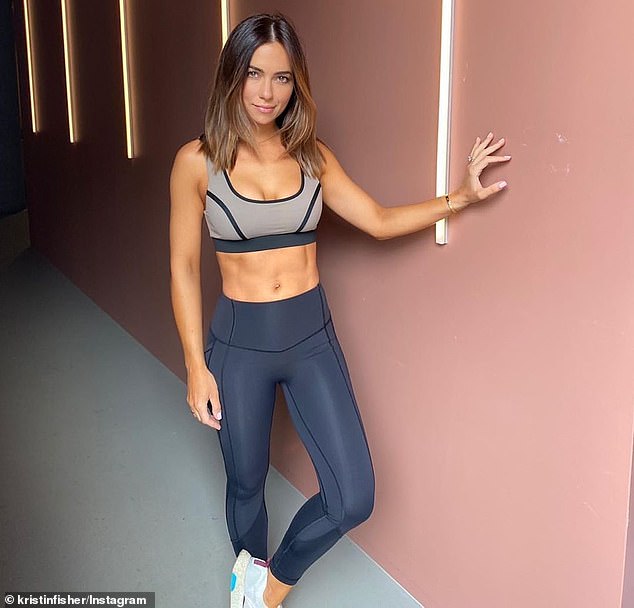 Kristin Fisher (pictured), who runs a beauty salon in the ritzy seaside suburb of Double Bay, hasn’t seen her family on the west coast for seven months 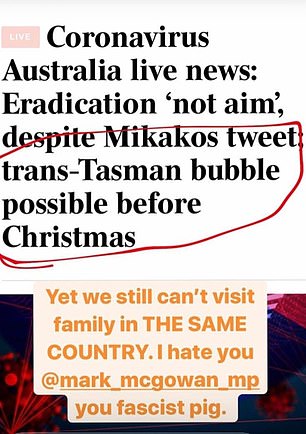 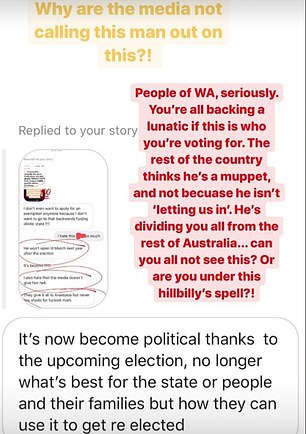 Ms Fisher is among tens of thousands of Western Australians who have been separated from their loved ones since Mr McGowan sealed off the state on 5 April. Pictured: Ms Fisher was left furious by news reports that Aussies will be able to go to New Zealand before WA

Under the strictest coronavirus border rules in Australia, no-one can enter unless they have been granted an exemption, even if they normally live in WA.

Even people living in areas such as the ACT and the Northern Territory, which have had no community transmission for months and have fewer Covid cases than WA, are barred.

There have been reports of retirees being trapped away from home because they were on holiday over east when the border shut and pregnant women remaining separated from their husbands after leaving WA to visit family.

Earlier this month, Ms Fisher missed her father’s 70th birthday and said she has ‘had enough’ of the border closures.

On 1 September she wrote: ‘Today our beautiful dad turns 70. It’s been seven months since we’ve seen our family in WA and quite frankly, I’ve had enough. We are missing out on his 70th birthday party in our hometown of Broome where all of our family and friends are flying in for’.

She added: ‘Mark McGowan get off your high horse and open the god damn borders. The virus isn’t going anywhere anytime soon. LET US INTO WA! Without a two week isolation period pls. Who the F has time for that. We ain’t flying in from Wuhan mate! End rant.’ 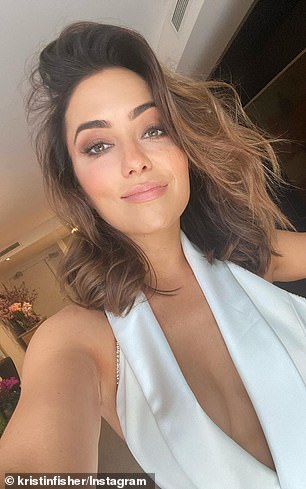 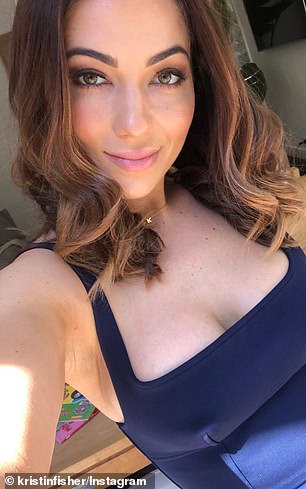 Under the strictest coronavirus border rules in Australia, no-one can enter unless they have been granted an exemption, even if they normally live in WA. Pictured: Ms Fisher 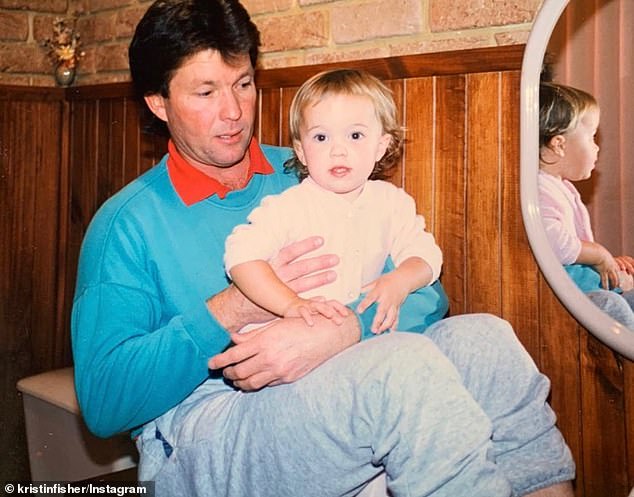 Earlier this month, Ms Fisher (pictured with her dad) missed her father’s 70th birthday and said she has ‘had enough’ of the border closures 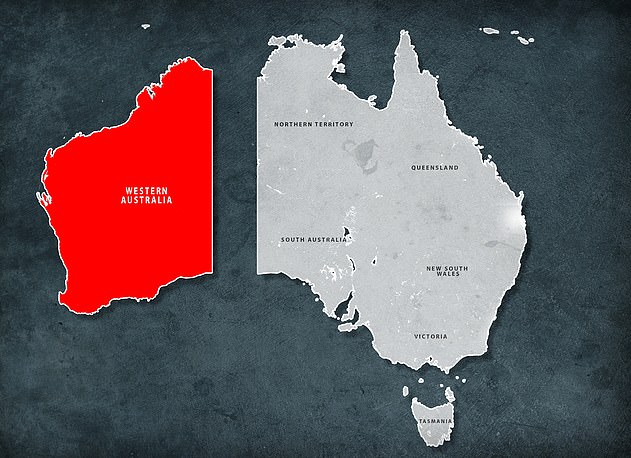 On Tuesday Ms Fisher took another swipe at the premier calling him a ‘fascist pig’.

The federal government is in talks with New Zealand about setting up a travel bubble which would allow residents to move freely between the two countries.

Responding to reports that it could be in place before Christmas, Ms Fisher wrote: ‘Yet we still can’t visit family in the SAME COUNTRY. I hate you Mark McGowan you fascist pig.’

Western Australia has an election on 31 March and the border shutdown is popular, leading some commentators to fear Mr McGowan won’t open up until afterwards.

‘People of WA, seriously. You’re backing a lunatic if this is who you’re voting for. The rest of the country thinks he’s a muppet, and not because he isn’t letting us in,’ Ms Fisher wrote.

‘He’s dividing you all from the rest of Australia… can you all not see this? Or are you under this hillbilly’s spell?’

The WA government has said the border will not open until every other jurisdiction has no community transmission for 28 days, something that has not been achieved since the virus hit Australia in March.

All other states and territories have agreed to set a goal to get their borders open by Christmas, but Mr McGowan refused to join in with this aim.

He said on Tuesday: ‘Western Australia is the envy of the world. Our health and our economy is in the best possible position considering what is happening around us. That is why a cautious approach is necessary.

‘As always, like everything, we will continue to monitor the situation over east. But until we have confidence that community spread is under control, the border will stay in place.’ 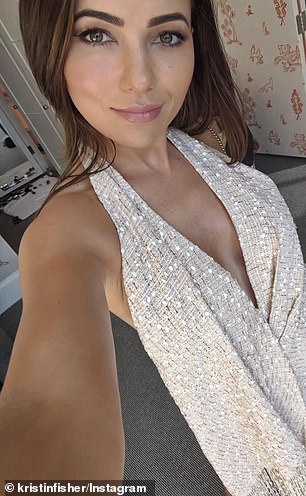 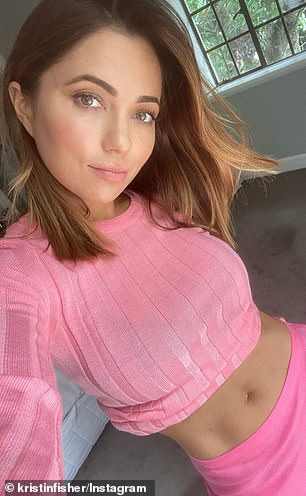 The WA government has said the border will not open until every other jurisdiction has no community transmission for 28 days. Pictured: Ms Fisher 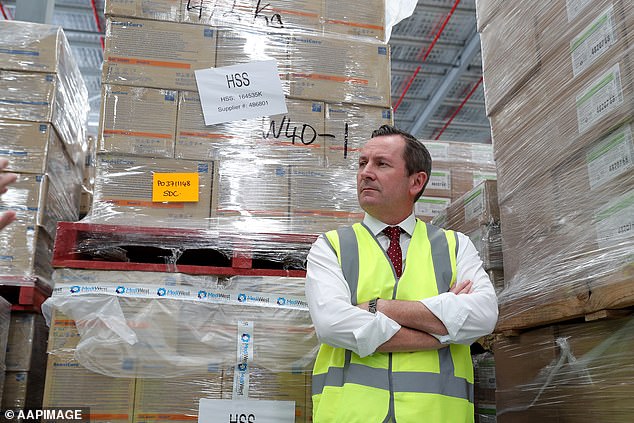 All other states and territories have agreed to set a goal to get their borders open by Christmas, but Mr McGowan (pictured) refused to join in with this aim.

Federal Tourism Minister Simon Birmingham has been urging WA to open its border to areas with no community transmission, fearing tourism businesses will collapse without any customers.

He has said there is no valid health reason for keeping the border shut to such areas.

In the state parliament earlier this month WA Police Minister Michelle Roberts said she was ‘incredibly empathetic’ to families who were torn apart – but said the border  closure will remain.

‘I cannot imagine what it would be like to not be able to see a loved one – a mum, a dad, a sister, a brother or a child – because of Covid restrictions,’ she said.

‘I know that it has been really difficult for people and that they have faced a burden because of it.

‘We have taken those precautions for the benefit of the whole community, because we do not want to deal with the consequences of Covid getting out of control.

‘We do not want to have a situation such as the one that has evolved in Victoria, which is not as bad as it is in many other places around the world.’

On Tuesday Western Australia recorded more Covid cases than Victoria when eight members of a cargo ship docked in Perth were diagnosed and transferred to hotel quarantine while Victoria suffered only five new cases.

For all jurisdictions except Victoria (including NSW from 5 October):

Any person performing a function under a Commonwealth law

People employed in agriculture, food production or primary industry who need to be in Western Australia

FIFO workers, subject to requirements to isolate for 14 days at an approved location at their employer’s expense

People with compassionate grounds – including urgent and essential medical treatment, visiting a relative who has suffered a serious medical episode, or whose death is imminent, and to attend a funeral

People whose residential facility, such as a boarding school, has closed, who need to return to Western Australia to stay with family or a carer

A person carrying out functions under a law of the Commonwealth