A couple of years ago, Grafton resident Joanne Boswell was dining at the Grafton Inn and heard two people from Maine chatting at the next table.

“I said, ‘Excuse me — Maine is so beautiful; why do you come here?'” she recalled. “And the man said, ‘Because there’s no place like Grafton.'”

People have been saying that about this southern Vermont village and its quintessential inn since Rudyard Kipling met up with friends on the broad, columned porch more than 100 years ago. The 45-room hostelry is the centerpiece of a tree-shaded Main Street lined with Greek Revival homes. As a neighborhood gathering place, nonprofit enterprise and Grafton’s largest employer, the rambling inn and its outbuildings serve as the heart of the town.

Grafton is an unusual place, a community of fewer than 1,000 people that, thanks to a 20th-century benefactor and the town’s distance from an interstate highway, has maintained much of its 19th-century appearance without becoming a museum.

The benefactor was Dean Mathey, a New Jersey financier who summered in Grafton and had an abiding interest in colonial architecture. He created and endowed the nonprofit Windham Foundation in the 1960s, not simply to conserve the town’s appearance but to give it new economic life.

In addition to the inn, the foundation operates Grafton Village Cheese and the Grafton Trails & Outdoor Center. It has also helped conserve land on the approaches to town.

“That is what makes Grafton special,” said Elizabeth Bankowski, a member of the foundation’s board and its former CEO. “You didn’t go by a strip mall or an out-of-scale housing development to get there. This is the rural landscape — when we imagine what Vermont looks like, we imagine Grafton.”

The foundation rebuilt the inn as its first project, converting it from a comfortable but modest waystation into a gracious, antique-filled hostelry that attracts guests looking for a getaway. Today, guests are housed in rooms furnished with four-poster beds in the main inn and in one of several white-frame homes nearby.

Like all of Vermont’s lodging places, the inn has spent much of this year adapting its hospitality to forestall the dangers of COVID-19. That has included offering takeout from the inn’s dining room (including quarts of housemade ice cream, some of the proceeds benefiting Grafton Fire and Rescue) and from a more informal pub housed in a barn behind the main building. Most radically, innkeeper Angela Comstock said, she removed the line of front-porch rocking chairs beloved by guests. 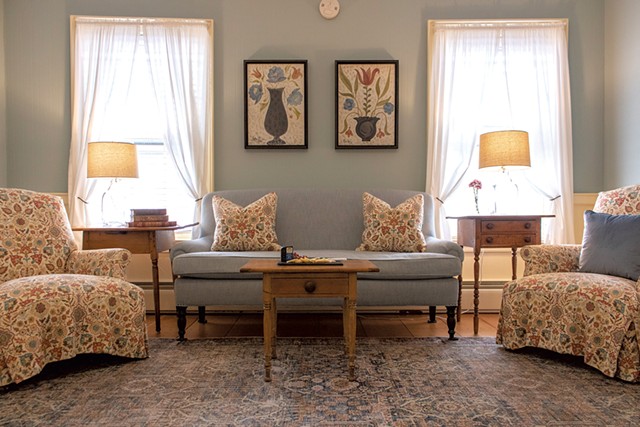 Room rates, which range from $199 to $400 a night during foliage season, include the inn’s copious breakfast and the chance for an early-morning dip in the pond hidden behind one of the inn’s guesthouses. As a COVID-19 precaution, the guesthouses are being rented this fall to single parties of family or friends.

As the weather chills, the inn will offer distanced dining in a heated tent in the courtyard, as well as indoors. (The inn will be open seven days a week through October 25, then five days a week).

Though Grafton is not on the road to anywhere in particular, its peace and quiet have drawn a stream of well-known visitors, including some who were regulars. 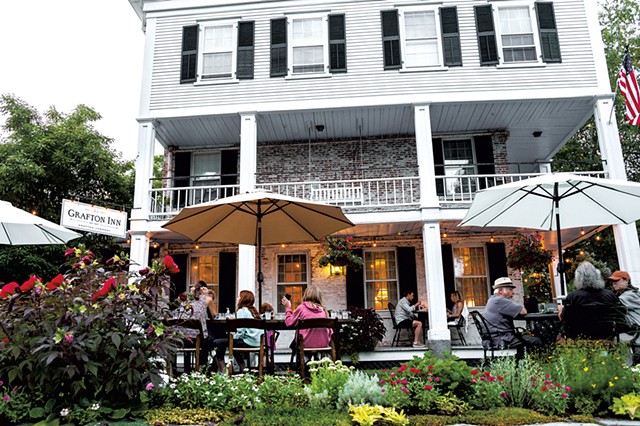 Despite its rocking-chair ambience, the inn is a good base for exploring southern Vermont, including on a recommended covered bridge driving tour of about 100 miles. For those not inclined to get in their cars, Toomey suggests strolling the village to enjoy its classic streetscape, with a stop at the brick meeting house recently restored by the Grafton Historical Society.

Also on Main Street, history buffs will find a kiosk telling the story of Alexander Turner, a formerly enslaved Black man who fought in the Civil War and later settled in Grafton, where he and his wife raised 13 children. The Windham Foundation serves as steward of the family’s homestead site in the nearby hills, a stop on Vermont’s African American Heritage Trail.

Guests looking for an active getaway can hike or bike at the Grafton Trails & Outdoor Center, which connects to a larger network of trails through the region’s rolling, forested terrain. More trails can be found in the three state forests in Grafton. Outdoorsman and selectboard member Allan Sands recommends a hike up Bare Hill, so named because it was denuded in the days when 12,000 sheep grazed Grafton’s hills. The town park’s Red, White and Blue trails climb a bit but are easy enough for families, he said.

Boswell, the Grafton resident, first came to town 45 years ago when she and her husband stumbled upon the inn while touring Vermont from their home in Massachusetts. It was foliage season, and when they inquired about having brunch, they were told the dining room was full and that some diners had made reservations a year in advance.

Nevertheless, the Boswells had fallen in love. They returned to the inn at least once a year thereafter until, five years ago, they bought a home in town and moved to Grafton for good.

Recalling that first, unsuccessful attempt to enjoy the inn, Boswell said, “Every time we stayed, we made reservations for the following year — we were not going to be turned away again,” she said. “It is a piece of heaven in Vermont.”