Veena Sud’s entry into Amazon’s Enter the Blumhouse series is improbable, silly, stupid, and almost impossible to turn away from.

It’s remarkable what packaging can do for a film. In 2018, filmmaker Veena Sud’s second feature film bowed at the Toronto International Film Festival in the starry Galas section — other Galas that year included “First Man,” “A Star Is Born,” and “Widows” — where its heavy subject matter and high-profile placement seemed to earmark the drama as a contender to watch. First filmed under the title “Between the Earth and Sky” and based on a chilling German drama called “We Monsters,” the film promised to explore the psychological fallout of a horrible crime and the corrosive power it inflicts on a crumbling family. Sud had also locked in an exciting cast, including Joey King (pre-Emmy nomination), Peter Sarsgaard, and Mireille Enos, all the better to beef up its seeming gravitas. In short: it sounded good.

Two years after an unimpressive showing at TIFF, “The Lie” finally gets a release, rolling out as part of a planned eight-film package of horror films (a genre distinction, it seems, that is to be taken loosely) sent straight to Amazon Prime Video streaming by Blumhouse Productions. Too stupid to be the hard-hitting drama it was first sold as and too self-important to be the black comedy it really should be, Sud’s film is a master class in bad decision-making, improbable choices, and overwrought acting. It is also incredibly difficult to turn away from, each plot point more ludicrous than the next, all leading up to an ending that should rank among the all-time great fake-outs, should anyone choose to remember the film beyond its zippy 97-minute running time.

Opening with a series of home videos of young star King, the actress’ natural effervescence is on full display. She will, of course, turn out to be a monster. Sud, who also wrote the film’s script based on Sebastian Ko and Marcus Seibert’s 2015 German drama, introduces a series of key plot points early on: King’s Kayla is a teenager desperate to be a grownup (which doesn’t keep her from continually misplacing her inhaler and putting her own health at risk), her once-happy parents (Sarsgaard and Enos) are now separated, and she’s often tasked with keeping their secrets from each other.

During a hand-off between Rebecca (Enos) and Jay (Sarsgaard), it’s clear that there is still a bit of a buzz between the former spouses, and their chemistry livens up the cool tones cinematographer Peter Wunstorf bathes the mostly icy feature in at all times. When Jay and Kayla head out for a dance retreat the sulky teenager is stuck attending, imagine their surprise to find Kayla’s best friend Brittany (Devery Jacobs) waylaid on the side of the road, also making her way to said dance retreat. Vivacious Brittany is flirty with Jay, a plot point meant to help the audience swallow what comes next: Kayla shoving her off a bridge and into an icy river during a pit stop.

It’s certainly not beyond the realm of possibility that an enraged teenager is capable of murder, but the swiftness of the act, the wacky brazenness of it, is hard to buy after spending mere minutes with not just Kayla, but Brittany too. After making the film in 2018, King herself went on to play a calculating real-life killer Gypsy Rose Blanchard in the miniseries “The Act,” which earned the actress her first Emmy nomination. While King’s depiction of Kayla is far less nuanced than the work she did in “The Act,” she often seems like the only person aware of just how ludicrous this all is, the only one having even the slightest bit of fun.

That’s sort of the problem for Jay and Rebecca, who are baffled by the realization that their kid is a) a killer and b) seemingly totally unbothered by it. Sud continually cuts away from the more compelling dimensions of this particular pickle, like the actual murderous act and Kayla’s confession to her shell-shocked mom, all the better to hasten the film to the big idea: what if this entire family just covered up this awful crime? 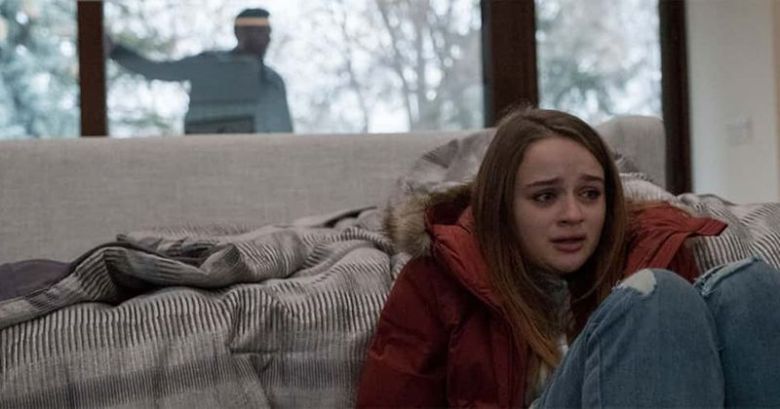 It’s a good idea for a film, but in Sud’s soapy hands, it becomes nothing more than an excuse for dramatic screaming, muffled sobbing, and a series of gleefully twisted plans that have all the grace of a slow-speed car crash. While Jay and Rebecca plunge themselves into increasingly awful schemes, Sud and her stars often seem close to interrogating the film’s most interesting question: who the hell did these two raise? Sarsgaard and Enos are a fun match, basically falling prey to folie à deux, but the moments in which they are forced to explore Kayla’s seemingly true nature are some of the only ones that aren’t patently ridiculous. They are few and far between.

In a recent interview, the filmmaker said that the film is “a microcosm of the bigger American experience of racial injustice” and one that depicts “the real life horror of America today … the criminal justice system and how it treats human beings radically different based on the color of their skin.” (The film was shot and is set in Toronto.) While so much of “The Lie” is built on bizarre choices, the film’s subplot about the treatment of Brittany’s father Sam (Cas Anvar) is the most grounded of its elements, which unfortunately does not stop the filmmaker from handling it in the most hammy of ways.

Most damning, however, is Sud’s decision to continually frame Sam — who Jay and Rebecca attempt to frame for the murder of his own child, someone who is absolutely a victim and, in Sud’s own telling, one emblematic of true-life victims — like a horror film monster, all lurking countenance and full-throated screaming. At one point, he even appears to be bent on running Kayla over with his car, and while that might just be her perspective, it also seems to be Sud’s, because she films him with all the terror of a Michael Myers or Jason Voorhees.

It all builds up to a conclusion that is so deranged and twisted that it almost, almost, makes everything else worthwhile, a nifty “gotcha!” moment that reframes Kayla (and the film) into an even more chilling light. But that’s a big ask for a film that so often traffics in the basest of choices and lowest of ideas, precious time spent consuming a piece of entertainment that would like us to believe it’s a horror film now, just because the packaging says so. The truth is less thrilling: it’s just bad.

“The Lie” is available to stream now on Amazon Prime Video.

Sign Up: Stay on top of the latest breaking film and TV news! Sign up for our Email Newsletters here.