Still from Distance Noguchi, 2020, © The Isamu Noguchi Foundation and Garden Museum, NY / Artists Rights Society (ARS) The Noguchi Museum, in Long Island City, may be the only museum in America improved by not having a living soul in it. For it has a soul already — this […]

The Noguchi Museum, in Long Island City, may be the only museum in America improved by not having a living soul in it. For it has a soul already — this place.

So, at least, is the logic that lies behind the institution’s very particular response to the coronavirus lockdown. Titled Distance Noguchi, the exhibition consists of 22 separate films (the two longest had to be split in half to successfully upload to Vimeo), ranging from one to 11 hours in length, shot in various parts of the museum. They’re not action flicks. To make them, artist Nicholas Knight used a stationary high-resolution camera, composing each shot beautifully and then simply walking away. The films he shot indoors seem like still photographs, at first; but if you wait long enough you’ll have the quietly rapturous experience of seeing the natural light slide, slowly, slowly, across a sculpture’s surface. Other films, taken in the museum’s famous sculpture garden, are faintly stirred by the wind, the gentle splash of a fountain. The chance arrival of a bird comes to feel like a major event.

The short and long of it is that what Andy Warhol’s Empire did for cinema, Distance Noguchi does for online programming. In their sheer slowness, the films, which total about 75 hours all told, serve as a vivid departure from the norm, and a gentle provocation. Curator Dakin Hart, who devised the project together with Knight, says that he was inspired by a counterintuitive thought: The enforced closure of his museum had brought it to a sort of ideal state. It’s common enough to hear this place described as a pilgrimage site, where one does not so much look at art as commune with it. But Hart goes further. “The museum doesn’t need you,” he told me, with a smile. “It doesn’t want you. It has no more interest in you than the ocean does. Which is to say, none whatsoever.”

That sentiment certainly flies in the face of most museums’ strategy these days. Most institutions have oriented themselves unswervingly to increasing attendance figures — and not only for financial reasons. High visitor numbers are taken as an indication that a museum is connecting to its community, proving its value. But Noguchi didn’t look at his museum that way; he created it toward the end of his career to preserve his own point of view without interference, when he was past proving himself to anyone. As he told the museum’s second director, Allan Wardwell (who had previously been at the Asia Society), in 1988: “I personally am in no way worried if people have stopped coming to the museum. Maybe all the people interested in what I do have already seen it.” Just as he asked himself, when shaping stone or metal, “how not to ruin nature, and yet to be equal to it,” he thought of his museum as something like a forest, a habitat that one can certainly visit and appreciate, but which works at its own timescale, and does not require any external validation.

This might seem a rather lofty, even elitist, vision (and one that can be maintained only thanks to the museum’s relatively large endowment and ongoing income from Noguchi’s wide-ranging design endeavors, such as his Akari lighting). But the converse — an obsession with audience — isn’t such a good thing either. The never-ending drive to increase museum attendance is no more sustainable than any other version of perpetual growth; it is, as Hart nicely puts it, “a shark-like way of thinking, absorbed from American industry.” And, like capitalism at large, this sector-wide set of priorities has been called to possibly existential account with the onset of Covid-19. With visitorship likely to be held at artificially low levels for the foreseeable future, in the interest of public health, museums will have to find other metrics of success.

Doubtless, this will occasion a further reallocation of resources into virtual space, if only to rack up public engagement statistics. But this will bring its own problems, as museums are forced to compete for the attention of an already massively distracted public, likely at the cost of curatorial rigor and care. Against this potentially unedifying backdrop, Distance Noguchi announces a very different set of values, qualitative rather than quantitative in nature. Its magisterial pace is not so much elitist as Olympian, detached from the fray.

Ideally, the films would be projected on a wall, big as life, serving as a background to one’s own. Yet even then, the project would not become an (inadequate) substitute for an in-person visit, as is so often the case with online museum content. Rather, it is a poignant reminder of what we are missing while the doors are closed, and at the same time, a helpful decentering. Here, to paraphrase Noguchi, is how not to ruin a museum: We need to remember that at the end of the day, it’s not all about us.

Mon Sep 28 , 2020
BETHESDA, MD—In a survey led by Marriott Bonvoy, Marriott International’s travel program, on the expectations of meetings & events in the Asia-Pacific region, half of those surveyed are planning to continue with offline events (50%). However, there is a high volume of concerns around government regulations (45%), and safety and […] 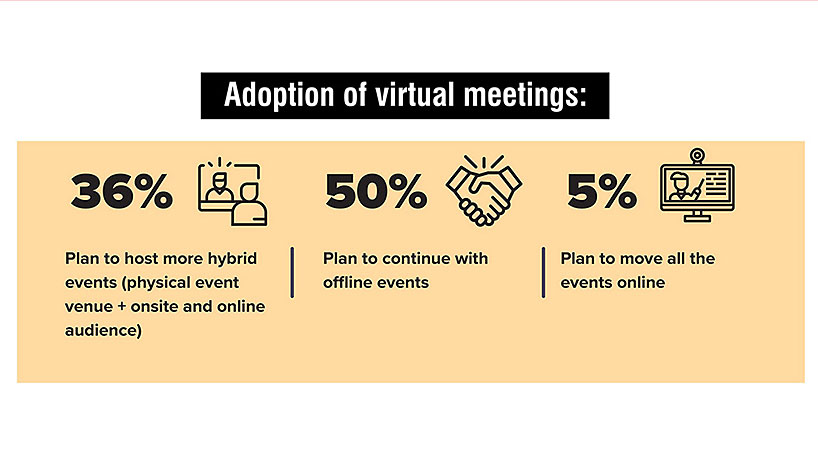