He has always had an eye for a model – and his relationship with this one has so far lasted longer than each of his three marriages. Now Rod Stewart is sailing his model railway across the sea – to be near him in his Essex home. The impeccably detailed […]

He has always had an eye for a model – and his relationship with this one has so far lasted longer than each of his three marriages.

Now Rod Stewart is sailing his model railway across the sea – to be near him in his Essex home.

The impeccably detailed layout, considered a masterpiece among enthusiasts, has taken decades to build and currently lives in the attic of the singer’s Los Angeles home. But in the surest sign yet that Sir Rod is planning a permanent move back to the UK after 45 years stateside, The Mail on Sunday can reveal that it is being shipped back to his home soil.

The 124ft-long, 23ft-wide miniature replica of a 1940s US city is to be dismantled for the journey and will be painstakingly put back together in his mansion in Sheering by the veteran singer and a team of craftsmen and women.

‘I am moving my model railroad from America over to here,’ confirms Sir Rod, who says his interest in model railways goes back to his childhood in North London.

‘It is all because my dad bought me a signal box and I was born across the railway tracks in Highgate,’ he adds.

The singer, 75, who has sold more than 250 million records and enjoyed massive hits with the likes of Sailing and Maggie May in a career spanning 59 years, started building the railway after moving to Beverly Hills in the 1990s.

It took him 23 years to complete and now includes 5ft skyscrapers, bridges, a rush-hour traffic scene, ‘transition era’ facilities for both steam and diesel traction, and a power station.

‘They say model railroads are never finished but this is finished,’ Sir Rod says. ‘When I completed it, I thought, “Jesus, what am I going to do now?” So it is all coming over and will be up and running after Christmas.’

Few model railways are as vast or intricate. But Sir Rod faces competition from fellow musician Jools Holland, 62, who also has a 100ft-long model in the attic of his home in Kent.

Holland’s track recreates London street scenes in the 1960s, and a replica of the Channel Tunnel. But Sir Rod shrugs off any suggestion of rivalry. ‘Jools Holland has a nice one but it is nowhere near as good as mine,’ he jokes.

But in April, the singer and his wife, Penny Lancaster, 49, and their sons, Alastair, 14, and Aiden, nine, were spotted outside their Essex home taking part in the weekly NHS clap for carers.

The move is likely to be linked to Penny’s decision to train as a special constable with City of London Police after appearing on Channel 4’s Famous And Fighting Crime.

Meanwhile, Sir Rod, who wed Penny in 2007 after previous marriages to Alana Stewart and Rachel Hunter, is set to undergo ankle surgery just months after a knee replacement.

Sun Oct 11 , 2020
UT says the Alabama game is now sold out and fewer than 600 tickets remain for the Florida game KNOXVILLE, Tenn — There are a few single-game tickets available for Tennessee football home games. Neyland Stadium will be at 25 percent capacity this fall because of the COVID-19 pandemic. Tom […] 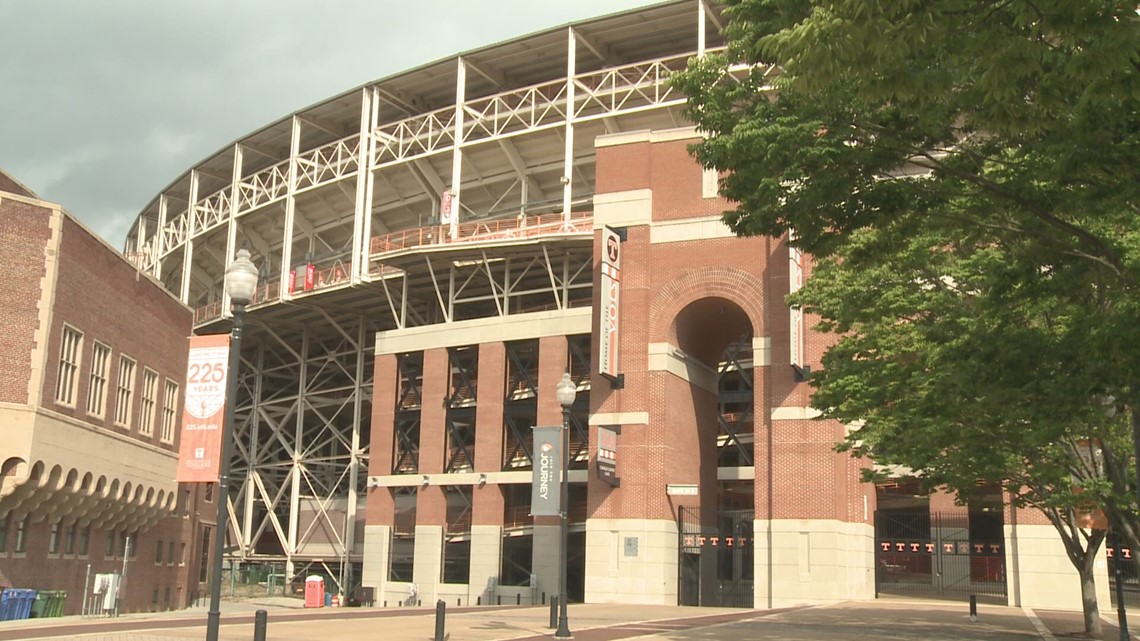