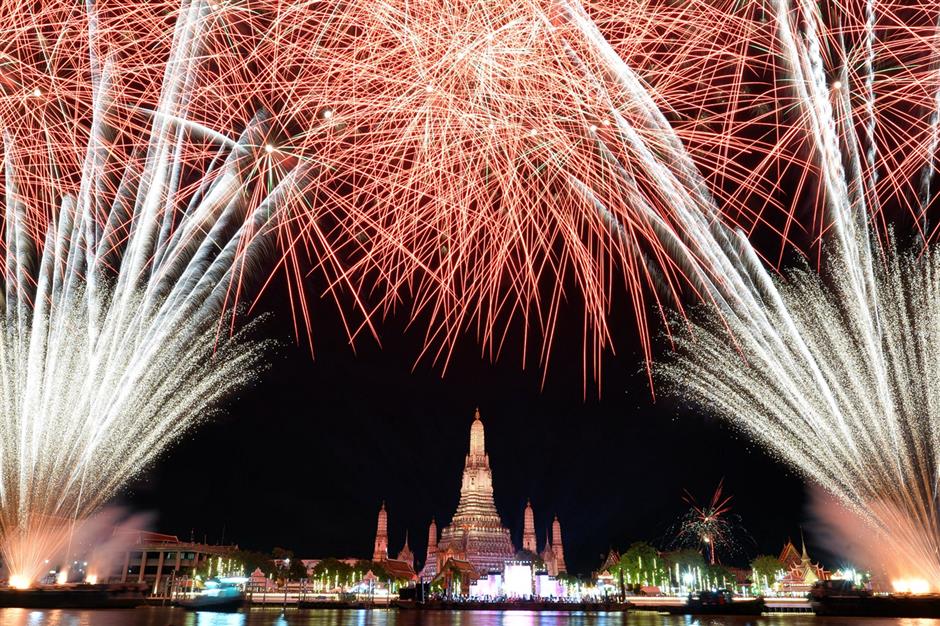 Bags packed. Airline tickets in hand. Travel documents stamped. The excitement is swelling as Chinese tourists head off for their first overseas destinations after three years of coronavirus restrictions.

Zhang Jiawei wasn’t disappointed as he disembarked in Bangkok. A Thai greeter placed a garland around his neck and even the Thai deputy prime minister was on hand to welcome Chinese visitors back.

Zhang was in the first tour group that boarded planes for outbound trips after China lifted COVID-19 restrictions on January 8. He’s livestreaming his trip for Ctrip, a major online travel service platform in China.

“My major task is to promote a hotel and share the latest travel guides to the country,” he said. 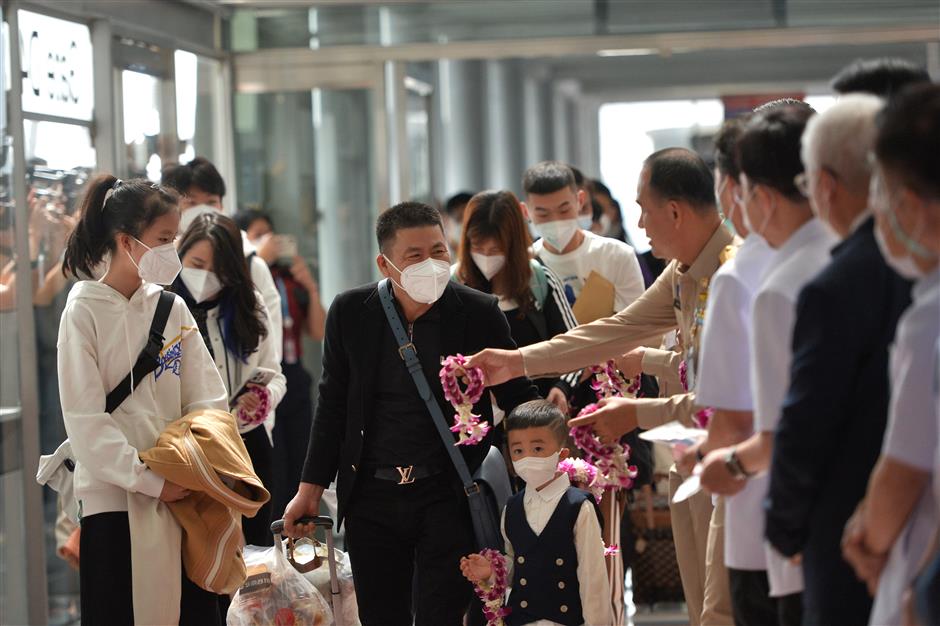 Chinese tourists are greeted by Thai officials as they arrive at Suvarnabhumi Airport in Bangkok on January 9. 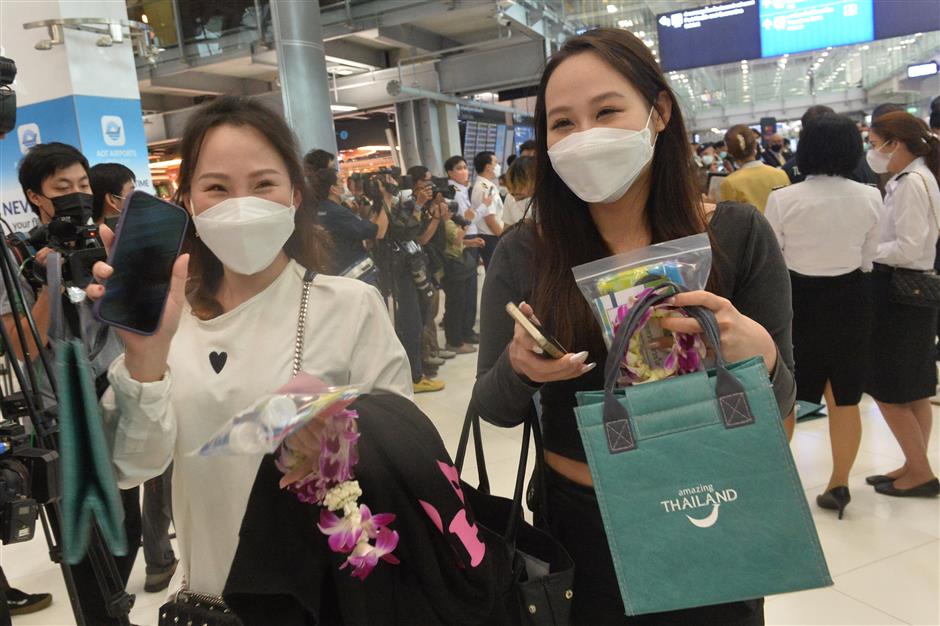 Chinese tourists receive garlands and other welcoming gifts from the Thai government.

Zhang is no stranger to Thailand, but this time he found the country a bit different.

“There are not as many tourists as before, and most of them are from Europe and America,” he said.

The return of the lucrative Chinese trade is beneficial for both visitors and Thailand’s tourism industry. 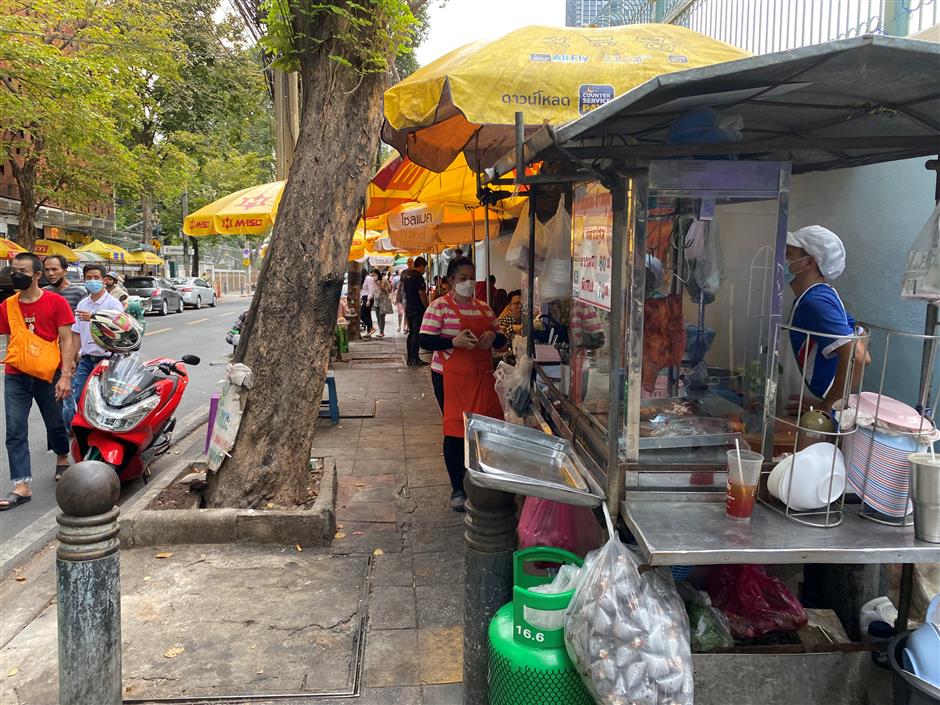 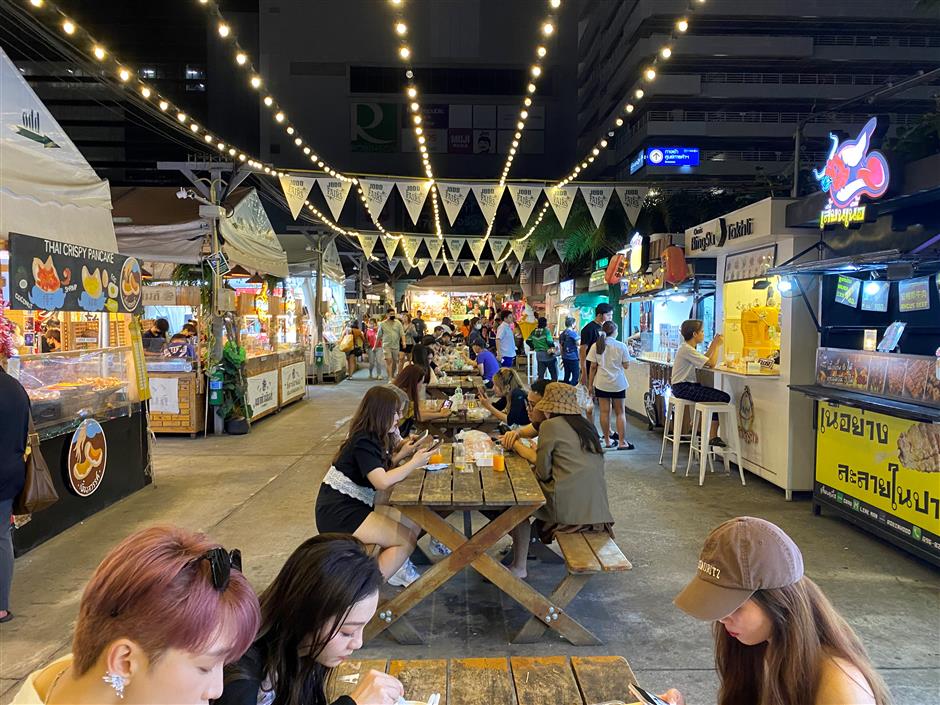 Popular street fairs in Thailand are getting busy again as tourists come back.

The lifting of COVID restrictions in China on both inbound and outbound tourism has triggered a wave of travel and reignited Chinese people’s passion for offshore holidays.

Airline ticket bookings this week were the highest in three years, and crowds of people rushed to entry-exit administration offices to apply for or updated passports and entry-exit permits to Hong Kong and Macau – two other popular destinations.

When the Hong Kong border reopened on January 5, Ctrip said its website handled a 290 percent surge in airline bookings.

The platform said 52 percent of bookings were for outbound flights, mostly to Hong Kong, Macau and Southeast Asian destinations. 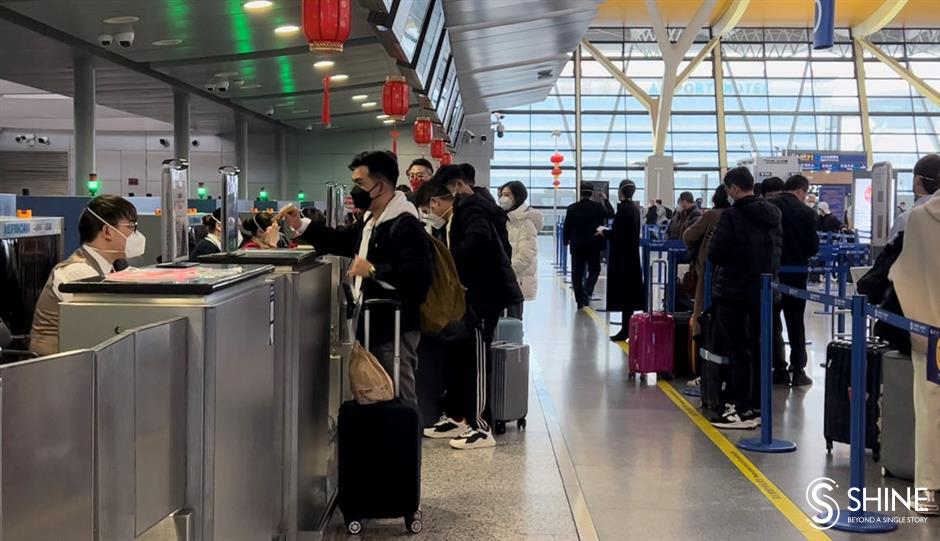 The two airports in Shanghai have become much busier than a month ago. The steadily increasing outbound flights gave more people better opportunities to travel overseas after a long hiatus.

At Shanghai Pudong International Airport on Friday, Beijing resident Yan Zhiyong was about to aboard a plane to Dallas, the United States. He planned the trip immediately after the COVID-related restrictions were lifted. He felt fortunate that his visa to the US was still valid after the three-year pandemic. 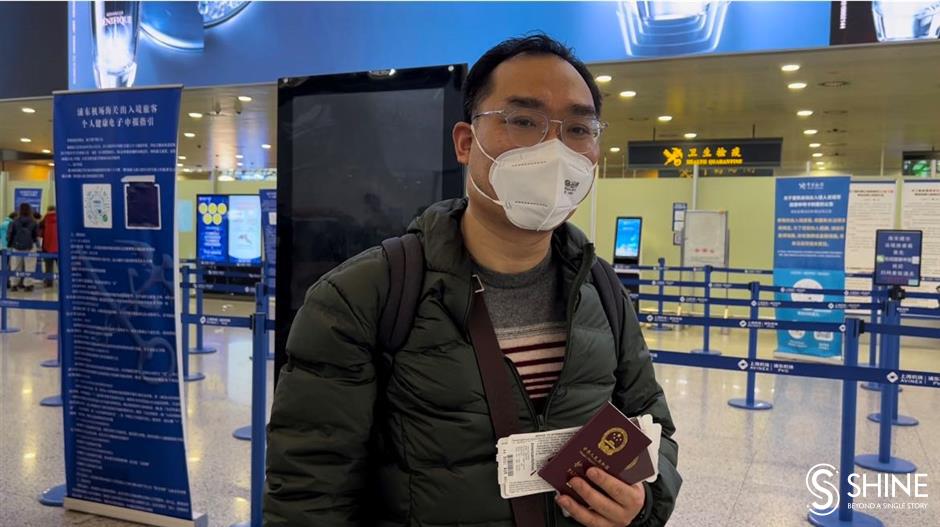 Beijing resident Yan Zhiyong shows his passport and tickets at Pudong airport in Shanghai on Friday as he waits to aboard a plane to the Texas city of Dallas.

“I want to travel around the country, both east and west, for about 20 days. It’s a leisure trip as well as a field visit for my child’s future study,” Yan said. “I just did a PCR test before departure and signed a notification on vaccine. It’s really convenient.”

Meanwhile, lines were long at the Shanghai Exit-Entry Administration in Pudong where waiting times can stretch to more than two hours in the best of times.

White-collar worker Pang Dan said it took her more than half an hour just to get a waiting number at the bureau’s Hongkou branch, with 95 people ahead of her. Ultimately, she failed to get the documents to go to Hong Kong.

“The self-service machine that can issue travel certificates was out of service, so I had to settle for window service,” she said. “But when my number was finally called, the officials there told me that I would have to wait until January 30. That means I have to cancel my travel plan for the Spring Festival holiday.” 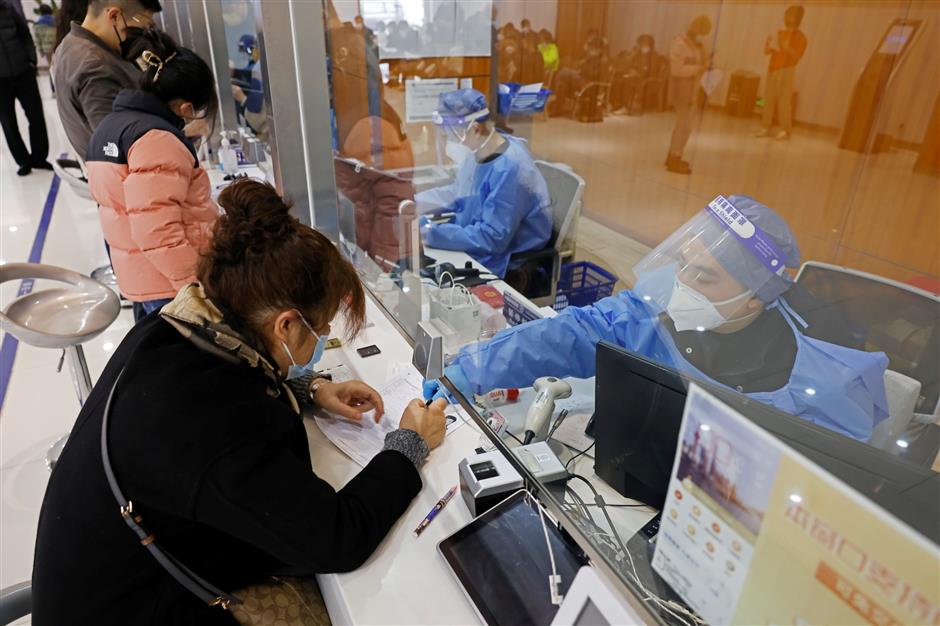 The Shanghai Entry-Exit Administration is getting busier as people rush to get their travel certificates updated.

Thailand tries to make the document process as easy as possible. To go there, Chinese tourists don’t need to apply for a visa before departure. It can be issued upon arrival, and vaccine certificates are no longer needed.

Yuthasak Supasorn, governor of the Tourism Authority of Thailand, said this week that his country is hoping for “at least 5 million” Chinese tourists this year, with the first big wave expected during the Lunar New Year holiday this month.

On Ctrip, in one day alone, more than 20,000 room nights in Thailand were booked by Chinese visitors.

A professional travel blogger, whose screen name is “Kaidi Planet,” made it to Thailand on December 15 to look for new content ideas. She said locals were surprised that she was from China.

“The locals thought I was Korean or Malaysian Chinese,” she said. “But now visitors from China can be seen at the airport and in hotel lobbies.” 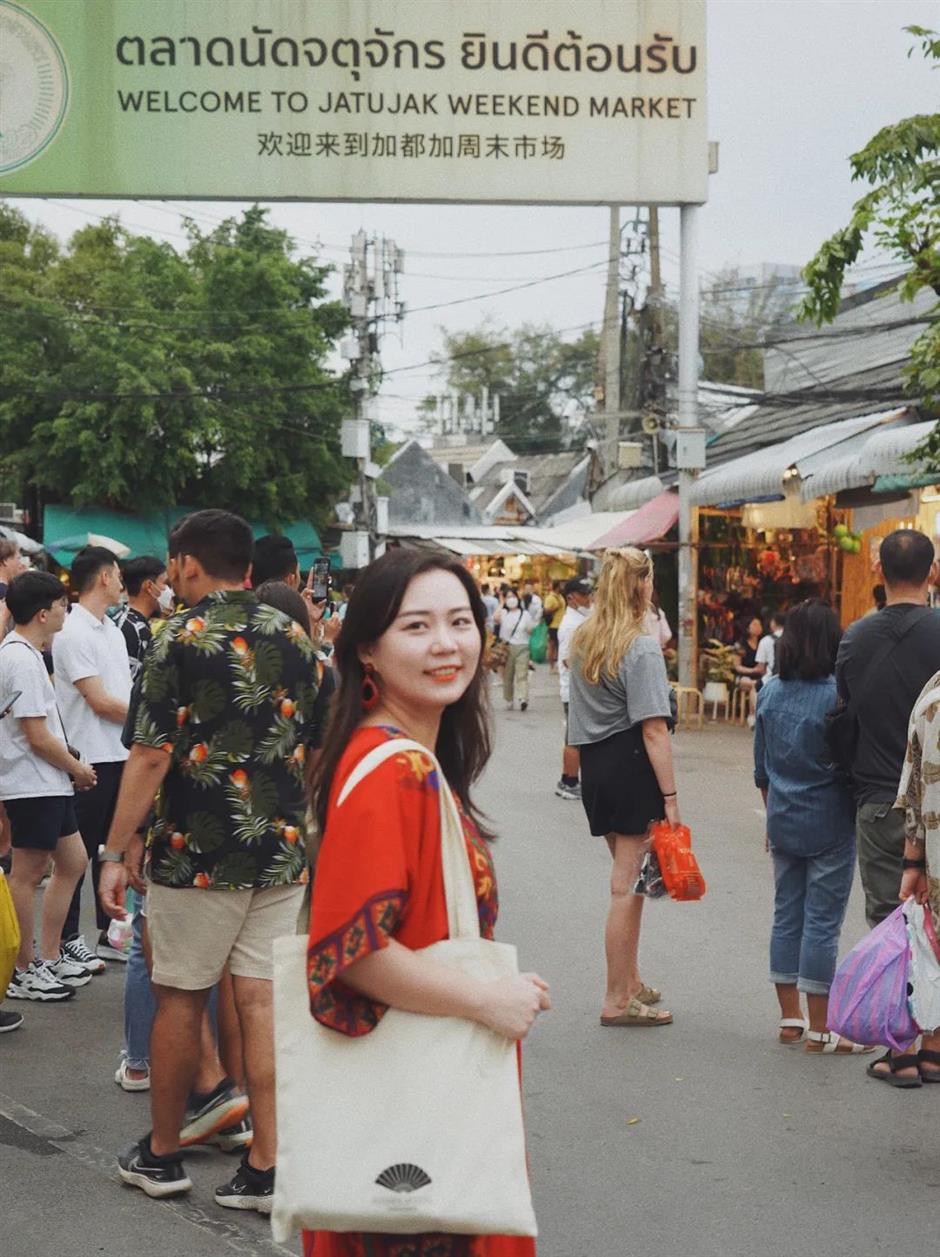 “Kaidi Planet” at a weekend market in Thailand

The blogger said countries like Malaysia are also poised to benefit from the return of Chinese tourism.

“I’m in Malaysia now,” she reported on her blog. “There are not many flights to islands yet, and, of course, no group tours. It’s actually a very tranquil stop for me.”

Compared with Thailand and some other Southeast Asian countries, the restoration of the travel market in two other traditionally popular destinations – South Korea and Japan – is lagging because of their entry policies.

Chinese visitors have complained that they are required to wear a yellow badge when entering South Korea and a red one in Japan, making them feel very uncomfortable and much discriminated. Visitors were also required to take a PCR test on arrival, and those who test positive need to go through a paid centralized quarantine. 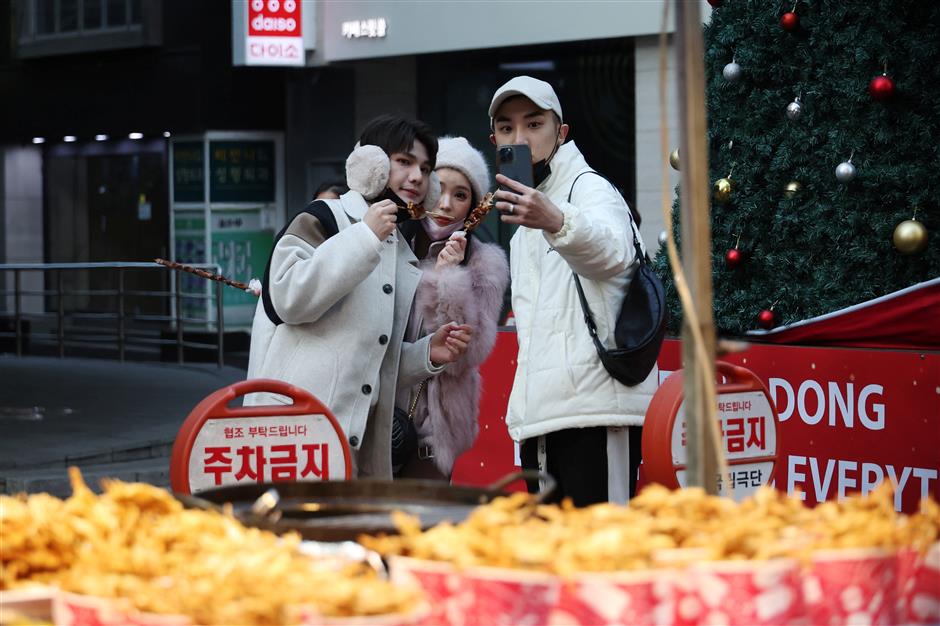 Chinese tourists take a selfie next to a street vendor at Myeongdong shopping district in Seoul, South Korea, on Monday.

In addition, short-term tourist visas issued to Chinese visitors have not been resumed yet.

“In Japan, for example, only five-year multiple entry visas are available now and they are targeted mainly as high-income travelers,” said Tracey Shi, a visa operator with a local travel service company. “We think that short-term visa application will be resumed in March, but no one can tell for sure.”

“Retraining personnel is our major task now,” said Zhou Weihong, deputy general manager of Spring International Travel Service Co. “For the past three years, many of our outbound travel personnel, such as tour guides and team leaders, have switched to domestic business or even left the industry.” 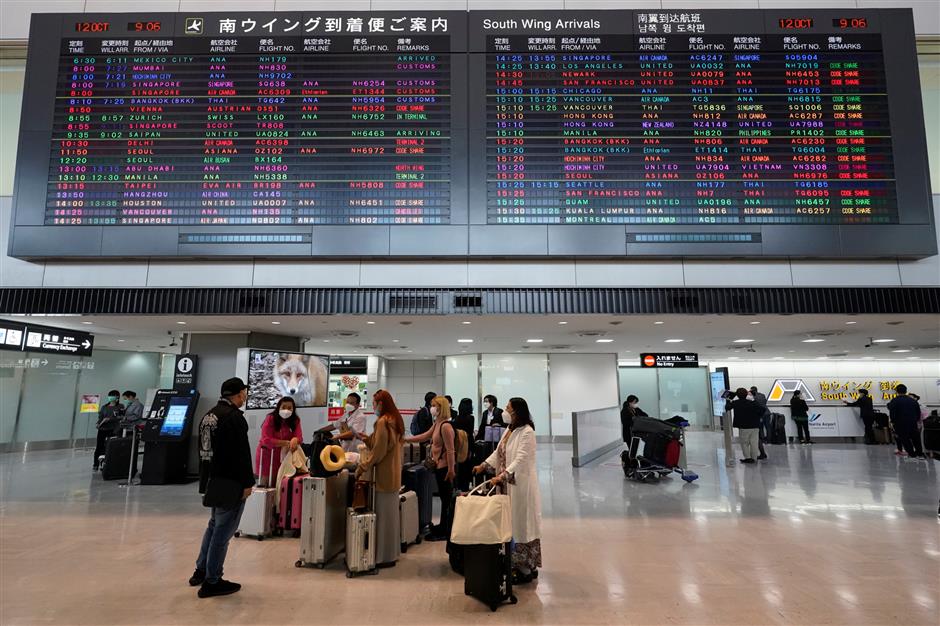 At Tokyo’s Narita International Airport, the gates have not been fully opened to Chinese individual travelers.

“At the moment, there are still factors affecting the market, such as inadequate flight capacity, expensive air tickets, ever-changing overseas entry policies and even the uncertainty of coronavirus itself,” said Liu Deyan, associate professor at the College of Tourism of Shanghai Normal University. “It is estimated that some important air routes will be resumed in March, and the first real travel peak might not arrive until the summer holidays.”

“There is pent-up demand after three years,” the professor said.

Liu said the Chinese government and travel service companies need to facilitate the resumption of group tours, which are essential to the outbound travel market.