The pandemic hasn’t just closed theme parks. It has eviscerated the theme entertainment design industry. With parks around the nation delaying and canceling new projects, design firms have been laying off hundreds — if not thousands — of the people who have design your favorite theme park attractions.

Now a group of those designers is trying to get their jobs back and get this industry running at full capacity again. And the first step they see in doing that is… voting Donald Trump out of office.

They are trying to encourage voters across the country to do that by doing what themed entertainment pros do best — designing theme park attractions. Their work is “Trumpland,” a satirical, dystopian theme park experience that debuted today on Twitter and Instagram. 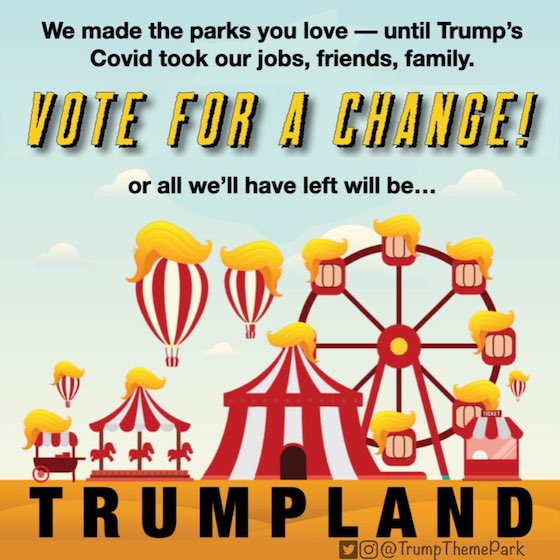 “So many gifted people have lost their jobs; I wanted to leverage their skills to protest the insanity of Trump’s governance in an entertaining and relatable way,” said Ross Osterman, a former Senior Director of Concept Development at Universal Creative who worked on projects from The Amazing Adventures of Spider-Man to Hagrid’s Magical Creatures Motorbike Adventure.

“Many let go at work were sending out farewell emails thanking their coworkers, wishing them well, recalling their wonderful experiences at Universal Creative. I didn’t want to distribute just another ‘more of the same’ letter, and I recognized that this was perhaps an opportunity to leverage all the talent being let go and focus it on a worthwhile, timely endeavor, and doing so might also benefit the spirits of those laid off.”

Osterman serves as the Creative Director for the project, which includes contributors from around the country, including current and former designers at Universal Creative, Walt Disney Imagineering, and other firms.

“Our mission is… about leveraging the artistry and talents of theme park designers, the public’s familiarity with many conventions of theme park and ride designs, and the authenticity of our ‘personal stories’ as professionals and Americans directly negatively affected by both Florida’s and the president’s mishandling of the pandemic, to humorously remind our audience of the many, many ways our government has failed us, and strongly encourage them to ‘Vote for a Change,'” Osterman said.

The team is inviting followers to submit design sketches and said it will donate $10 for each submitted and published sketch among three causes: America Votes, World Central Kitchen, and Immokalee Workers. The group said that it is committed to $3,000 in total donations. Sketches may be submitted to [email protected]

“We want smiles, but more than that, we want voters in hard-hit swing states like Florida to wake up and vote,” Osterman said.

* * *
We want you to read our articles before we make our newsletter pitch, unlike so many other websites. If you appreciate that — and our approach to covering theme park news — please sign up for our free, three-times-a-week email newsletter. Thank you.