Skip to content
By: Noble HorvathPosted on September 30, 2020
CLOSE 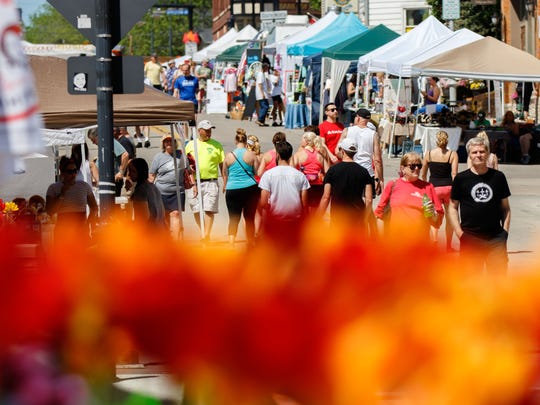 Money, an online source for personal finance news and information, ranked Menomonee Falls No. 15 for the Best Places to Live. It attributed one of the reasons for its ranking was the village’s summer beer gardens and festivals. (Photo: Scott Ash/Now News Group)

Many community leaders — who affirm Menomonee Falls “has it all” — were not surprised the village was recently ranked No. 15 in Money’s Best Places to Live for 2020 in America.

Sun Prairie, the only other Wisconsin municipality on the list, came in at No. 40.

Money, formerly a monthly magazine, is an online source for personal finance news and information, according to its website.

Chamber of Commerce director Toni Gumina said Menomonee Falls has been “very resilient during the pandemic” and said the village has strong retailers, diverse businesses and an exceptional police department.

“A lot of times I see the headlines, and we (people of color) know the poll was not taken by us,” said Sean Lowe, who is Black and treasurer at the National Urban League Young Professionals.

Lowe, who is also chairperson of Wauwatosa’s equity and inclusion commission, is helping to start a similar commission in Menomonee Falls, he said. He also helped with some of Menomonee Falls’ recent marches for racial equality.

“Did they get a minority outlook on this?” Lowe asked. “I think many of the suburbs do not equate to a Black experience.”

To make Money’s Best Places to Live, all municipalities needed a population of at least 25,000; not more than double the national crime risk and a median income of 85% or higher than the state’s median. Municipalities with little to no ethnic diversity were removed from consideration. Money also considered home prices.

From 1,890 locations that made the list, data was collected on the local economy, housing market, cost of living, diversity, public education, health and safety, weather, lifestyle and amenities.

As for Sun Prairie, Money noted the city’s various festivals, which include the annual Groundhog Day celebration, Taste of the Arts Fair, the Sweet Corn Festival, the Flags of Freedom marching band show and the Georgia O’Keeffe celebration. Sun Prairie’s unemployment rate was 7.3% in June, according to Money.

How should diversity be measured?

According to Money’s website, diversity was measured by the racial makeup of a community, the number of income brackets and the level of integration of both of those factors within the population.

But how should diversity be measured in this or similar polls?

“They don’t mention local issues,” said Robyn George, a 2020 Menomonee Falls High School graduate who founded the nonprofit Suburbs for Equality. “These are all important indicators of what life is like for people of color in municipalities.”

George, who is Black, said more qualitative questions should be asked in relation to whether people feel like they belong, feel welcome and if elected representatives have their best interest. Lowe said he would also add questions about the diversity of the police department and how children and families of color feel in school.

He added that if only people of color completed the survey, the results might have been different.

“These surveys do not equate to our experience,” said Lowe.

Village President Dave Glasgow said a ranking from Money is a “great feeling” because it is a reputable source.

“Menomonee Falls is a quaint village like no other,” he said, noting that the village has big businesses as well as a vibrant downtown.

“Not many places have both,” said Glasgow.

Fitzgerald also said the village has housing available for people of all ages.

“More and more families are coming here,” Fitzgerald said. “We have a diverse range of housing, everything from starter housing, high end and everything in between. That opens up for more people to become residents.”

Robyn George of Menomonee Falls is a leader of the Suburbs for Equity nonprofit, which promotes racial justice in the suburbs. (Photo: Submitted)

‘I do believe in the Falls’

Some community leaders who are working on diversity in Menomonee Falls said the village is headed in the right direction.

Lowe said the village seemed open to having an equity and inclusion commission when community members spoke about that need at the Sept. 8 board meeting.

“The village will go a long way if this commission is approved there,” said Lowe.

Another asset that Lowe mentioned was the Suburbs for Equality nonprofit, incorporated Aug. 17, which helps improve equality initiatives in the suburbs.

“The Falls could be a lot more diverse than what it is. But they’ve come a long way, for sure,” said Handy.

Despite that, Handy said that at times he has faced uncomfortable situations here due to being Black.

“Yeah, I do believe in the Falls,” Handy said. “I want to change the culture here and make the kids feel comfortable and welcome. So I will do whatever I have to to make that happen. Even if I don’t have the biggest platform to do so, I’d like to think I’m doing everything I can.”

Our subscribers make this reporting possible. Please consider supporting local journalism by subscribing to the Journal Sentinel at jsonline.com/deal.