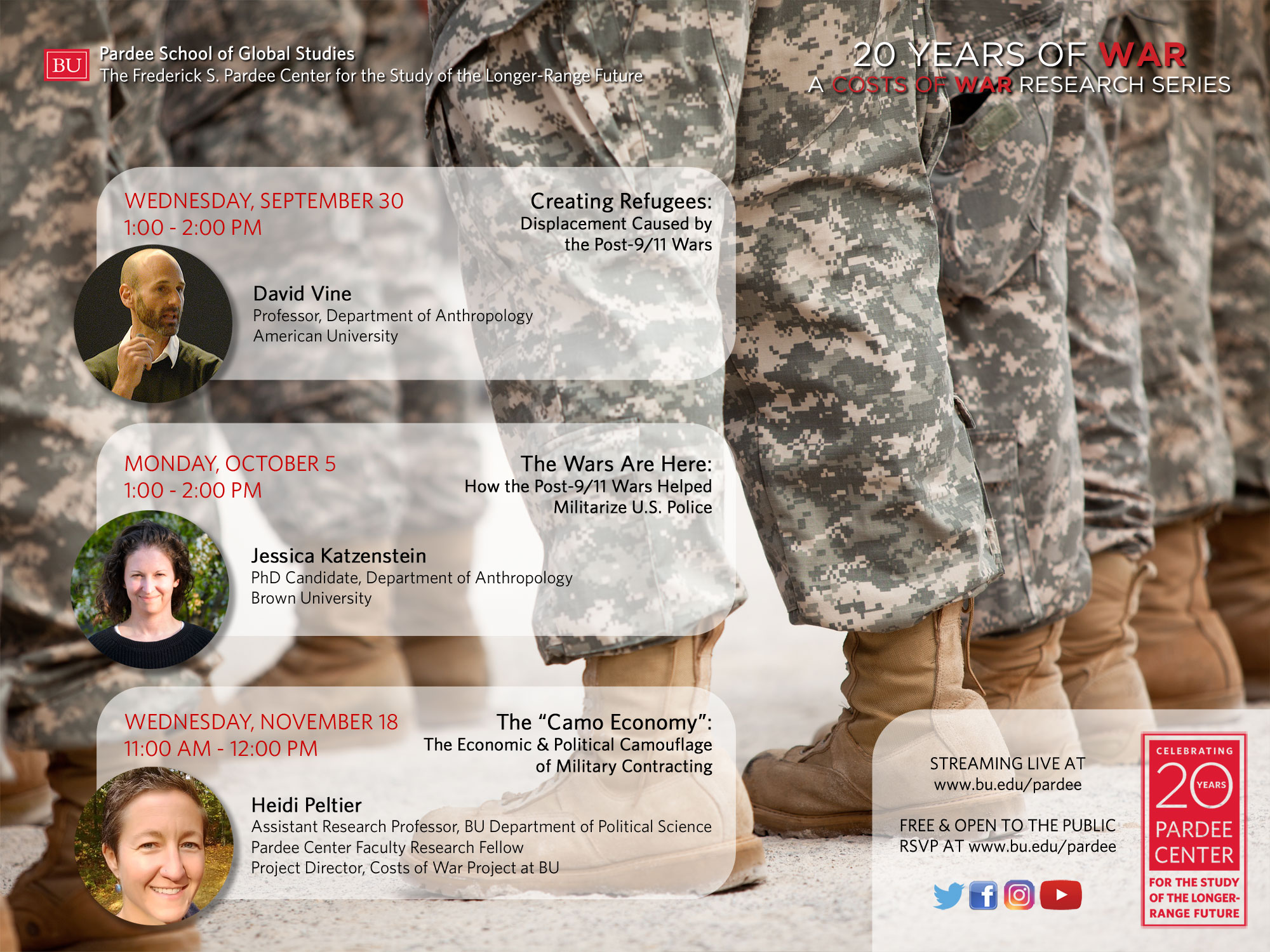 The Frederick S. Pardee Center for the Study of the Longer-Range Future invites you to attend an upcoming seminar series exploring various costs and consequences of the post-9/11 wars. The seminars are part of the “20 Years of War” research series, a two-year collaboration with the Watson Institute for International and Public Affairs at Brown University to expand the ongoing Costs of War project. The “20 Years of War” research series explores the human, financial, environmental, social, and political costs of the post-9/11 wars and illustrates how the impacts of the wars will ripple into the future.

All seminars will take place virtually and will be broadcast on the Pardee Center’s YouTube channel.

The wars the U.S. government has fought since the attacks of September 11, 2001, have forced at least 37 million people — and perhaps as many as 59 million — to flee their homes. In a first-of-its-kind calculation, a recently released report for the Costs of War Project conservatively estimates that the eight most violent wars the U.S. military has launched or participated in since 2001 — in Afghanistan, Iraq, Libya, Pakistan, the Philippines, Somalia, Syria, and Yemen — have produced 8 million refugees and 29 million internally displaced people. The estimated 37 million displaced is more than those displaced by any war since at least the start of the twentieth century, except for World War II. The harm inflicted on the displaced, among other victims of the U.S. Post-9/11 Wars, is incalculable. This event will offer an opportunity to discuss the significance of these new findings for U.S. and global responses to the displaced, for efforts to repair the damage from nearly two decades of war, and for the future of war and U.S. foreign policy.

Images from the 2014 protests against racist police violence in Ferguson, MO — of snipers pointing semi-automatic rifles into crowds and officers tear-gassing unarmed civilians — prompted many to compare the St. Louis suburb to occupied Gaza, Ukraine, or Iraq. During the summer of 2020, as the U.S. witnessed its largest public uprisings since the 1960s, police in mine-resistant vehicles once again occupied both the streets and mass public attention. In this moment of simultaneous continuity and potential transformation, it is vital to analyze both the deep roots and the recent upsurge of police “militarization” in order to grasp what calls for “demilitarizing” the police could mean. Drawing on a recent report she authored for the Costs of War Project, Katzenstein’s talk will trace U.S. police militarization from its colonial and anti-Black history through its intensification after 9/11, demonstrating how today’s armored vehicles and tear gas emerge from a deep lineage of “militarized” policing. Katzenstein will then chart how police militarization has exploded in the wake of U.S.-led post-9/11 wars, specifically examining the flows of military equipment to police, the burgeoning surveillance and intelligence infrastructure, and police departments hiring military veterans. Finally, she will discuss the costs of post-9/11 police militarization — not only in dollar terms, but also in the currencies of racialized violence, lost opportunities, and critical global analysis.

At least half of U.S. federal spending on the wars in Iraq, Afghanistan, and other areas in the “War on Terror” has gone to private contractors. Contracts have increased by 164 percent since 2001, particularly for services in or near the battlefield, including food, housing, and security services. Heidi Peltier, Assistant Research Professor in the BU Department of Political Science and a Pardee Center Faculty Research Fellow, will discuss the growth in what she calls the “Camo Economy,” attributable to ideological, political, and economic reasons, drawing on the findings of her recent report for the Costs of War Project. This includes the political camouflage of using contractors in place of troops, so that both financial and human costs of war are obscured. She will discuss the commercialization of the military and the implications for federal budgets and labor markets, as military contracting is both costly to taxpayers and extremely profitable to contractors, due in part to commercial monopolies and other features built into the structure of military contracts.