GREENWICH — A major transformation at the Bruce Museum, where a 43,000-square-foot addition will rise to double the size of the beloved institution, kicked off Thursday morning with a ground-breaking ceremony attended by art lovers, donors, educators and elected officials.

A patch of concrete striped with white paint demarcated the space where the new addition will be built. Executive Director Robert Wolterstorff asked the assembled crowd to look at the painted lines and “imagine the future” of an expanded cultural institution.

“We’re all here today because we can see the future, and we’re all passionate about it,” Wolterstorff said. He called the new addition to the museum an “architectural masterpiece,” but he said it would also be far more than just an eye-appealing building.

“As beautiful as it is, the building is only a container for what goes on inside. The new Bruce is going to change our lives, because of the learning that goes on here, the engagement with the community that it fosters and the great experience that it provides,” he said.

The new addition will double the exhibit space devoted to the sciences, and the museum’s leaders estimate that the number of students who visit the facility will double from 25,000 to 50,000 a year. The new exhibit space, Wolterstorff said, will “challenge thinking and excite wonder” among young people from around the region.

The amount of new art space, the executive director said, will also ensure “Greenwich will have a great collection of art in the public realm, where it can be enjoyed by all.”

New cultural activities will also be part of the museum. 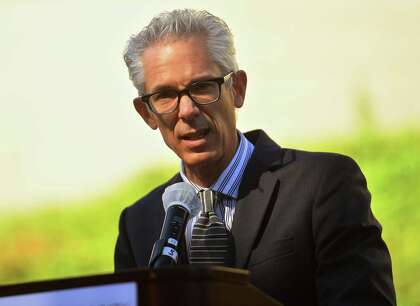 “The Bruce is about building community,” Wolterstorff continued, “We’ll have conversations, music, film, dance, poetry slams. And a restaurant — soon you’ll be able to say to your friend, ‘Hey, let’s grab a bite at the museum before we see the show.’ … We’re going to gather at the museum to engage in art and culture in real space, not on a computer screen.

“You’ll see old friends here, and you’ll make new friends, creating new connections. Connections are the very essence of community, that’s why the new Bruce is so important. It will be a hub for learning, engagement and life, it’s going to a lively and edgy place,” he said. “It will be a dynamo for education, discussion, learning, creating and community, and the energy will flow out from here.”

The principal architect on the project, Steven Dumez, said the aim of the new design was to enhance the connection of the museum to the park setting around it — “engaging the park,” he called it. His firm, Eskew+Dumez+Ripple, won the competition to redesign the museum seven years ago. A feature that appealed to museum leaders was a reorientation of the structure, with a grand new entrance facing Long Island Sound and the nearby Bruce Park.

“With this new front door, it’s going to provide a new face, a new connection for the community, inviting the community in, to spaces that are open and engaging,” Dumez said.

The new addition is set to open in the fall of 2022, and the museum will remain open during the construction, with the exception of a few months. Some preliminary construction work on the $45 million project began in 2018.

The new addition will be clad in stone, referencing the stone walls that crisscross southern Connecticut. The centerpiece of the new structure will be an open atrium, filled with white birch trees and other plantings, called a “light court.”

The new addition will feature the William L. Richter Art Wing, a large new gallery space for art. Richter told the crowd, “What an extraordinary opportunity to lead the creation of a new cultural institution for the ages. Thank you for allowing me to be part of its leadership. Rarely are we given such a chance to shape, build and transform an already iconic institution, which will soon be able to inspire and educate future generations.”

The governor said the upgraded facility will be a good tourism attraction for the region, and allow state residents to experience top-quality entertainment and culture in their own backyard.

Greenwich First Selectman Fred Camillo said in another video message, “We are proud of the job you have done, and proud of our hometown museum.”

The original building on the site began as a private home in 1853 for Francis Lister Hawks, a lawyer, clergyman and historian. The home and grounds were purchased in 1858 by Robert Moffat Bruce, a wealthy textile merchant. In 1908, he deeded his property to the town of Greenwich, calling for it be used as “a natural history, historical, and art museum for the use and benefit of the public.”

With the new exhibits and facilities, the museum management said the number of visitors could grow substantially from its annual total of 70,000 to 90,000.

After the ceremony, donors and VIPs were invited to dig into a dirt pile with shovels.