Skip to content
By: Noble HorvathPosted on October 8, 2020
CLOSE

The Vice Presidential debate had less arguing and a lot more talk about the issues, but there were still a few heated moments.

It was almost a given that Wednesday’s debate in Salt Lake City between Vice President Mike Pence and Democratic vice presidential candidate Kamala Harris would be less chaotic than the slugfest in Cleveland between President Donald Trump and former vice president Joe Biden.

Name calling and insults were largely absent and at one point, Pence congratulated Harris on making history by being the first Black woman and first Asian American woman on a major party ticket.

But there were plenty of skirmishes between the two candidates who were separated by plexiglass barriers and seated 12 feet apart because of coronavirus precautions. Harris, in particular, chastised Pence for interrupting her several times.

“Mr. Vice President, I’m speaking, I’m speaking,” she said at one point. Pence was far more restrained than his boss was during the Sept. 29 debate between Trump and Biden. Pence was under pressure to avoid coming off as a bully in his match up with Harris, particularly as the Trump campaign struggles to win over female voters.

While the more civil tone allowed for greater opportunities to delve into the issues, such as the coronavirus pandemic, the Supreme Court and the environment, both candidates arrived on stage with well-prepared talking points and sought to sidestep controversial issues.

Pence, for example, pivoted away from the topic of the COVID-19 outbreak that has swept through the White House, infecting Trump, first lady Melania Trump and several senior officials. Harris also declined to take a stance on whether she and Biden would favor expanding the Supreme Court if they win on Nov. 3.

Here are the takeaways from the debate:

Pence pivots when questioned on Rose Garden event and COVID

Video and photos showed that more than 180 people attended the Rose Garden event where guests hugged, shook hands and mingled in close proximity. Only about 50 wore masks and few practiced social distancing.

The gathering is now suspected of being a “superspreader” event, with many of those in attendance now infected with coronavirus, including Trump; first lady Melania Trump; former White House counselor Kellyanne Conway; Sen. Mike Lee, R-Utah and Sen. Thom Tillis, R-N.C. 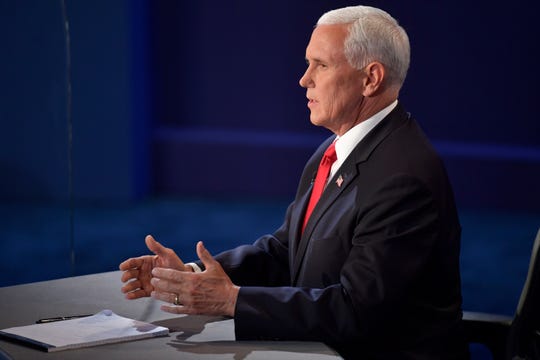 Asked how the American people could be expected to follow the federal guidelines if the White House doesn’t, Pence pivoted away from the issue to suggest a Biden-Harris administration would lead to overreach in tackling the crisis.

“That Rose Garden event, there’s been a great deal of speculation about it,” Pence said, asserting that many people who attended were tested beforehand.

‘Don’t be afraid of it’: Donald Trump talks COVID-19 on video after return to White House

“President Trump and I trust the American people to make choices in the best interest of their health,” he said. “Joe Biden and Kamala Harris consistently talk about mandates.”

COVID-19 and the health guidelines have become a flashpoint between the two campaigns on how best to overcome the crisis as Trump continues to downplay the health risks even after contracting the disease.

Measures to address coronavirus risks arose in planning for the debate. To avoid contagion, the candidates were seated 12 feet apart and plexiglass barriers were used – a measure the Trump campaign initially resisted.

Pence tried to get Harris to answer a question that she and Biden have repeatedly sidestepped: Do they support expanding the Supreme Court as many liberals are advocating?

Harris sought to put the focus on Republicans’ decision to move forward with filling the current Supreme Court vacancy so close to an election.

“I’m so glad we went through a little history lesson. Let’s do that a little more,” she said. Harris went back to 1864, when she said Abraham Lincoln didn’t think it right to fill a vacancy 27 days before an election.

“The American people are voting right now and it should be their decision about who will serve on this most important body for a lifetime,” she said.

Pence noted that Harris hadn’t said whether she wants to expand the court.

“If you haven’t figured it out yet, the straight answer is, they are going to pack the Supreme Court,” he said.

If the Senate approves Trump’s nomination of Amy Coney Barrett to the Supreme Court, it would cement the court’s conservative majority, potentially for decades to come.

Each candidate was asked what their respective states should do if the 1972 Roe v. Wade decision legalizing abortion was overturned.

Pence, of Indiana, ignored the question of whether he would want his state to ban abortion outright. Instead, he focused on Barrett’s large family and Catholic faith, and warned Senate Democrats against attacking their nominee too harshly.

“We particularly hope we don’t see the kind of attacks on her Christian faith that we saw before,” Pence said.

Harris, of California, said voters should elect a president before the Supreme Court vacancy is filled while taking exception to the vice president’s suggestion that she and other Democrats attacked any judicial nominee’s religious beliefs.

“It’s insulting to suggest we would knock anyone for their faith,” she said.

The senator also mentioned how the high court is hearing a case that could gut the Affordable Care Act amid a global pandemic. But she did get back to the original question, saying she is firmly in favor of her state affirming a woman’s right to terminate a pregnancy if Roe v. Wade is overturned.

“I will always fight for a woman’s right to make a decision about her own body,” Harris said. “It should be her decision and not that of Donald Trump and Michael Pence.”

Harris tells Pence: ‘I will not be lectured’

The candidates’ stark differences were on full display when it came to questions about the killing of Breonna Taylor, who was shot and killed by Louisville police officers in March.

Harris said justice had not been served in her case, while Pence said he had faith in the system that resulted in no charges against the officers for her death.

Pence said it was an “insult” to police officers across the United States for Biden and Harris to say there’s implicit bias in the criminal justice system. He said the Trump administration would “always stand with law enforcement.”

Harris response? “I will not sit here and be lectured by the vice president on what it means to enforce the laws of our country. I’m the only one on the stage who has personally prosecuted everything from child sexual assault to homicide,” she said, referring to her time as a prosecutor.

During one of the exchanges Harris used a question to trek through her resume as a prosecutor and to mention the “memorable” day that Biden offered her a place on the ticket, tapping her to become the first Black woman and first Asian American woman on a major party’s presidential ticket.

“I though of my mother who came to the U.S. (from India) at the age of 19 … And the thought that I’d be sitting here I know would make her proud,” she said, as she briefly looked skyward. “She must be looking down on us.”

Pence, a former Indiana governor, mentioned that Trump’s team was moved by the prayers and concerns after the president contracted COVID-19. He then pivoted to acknowledge Harris’s historic nomination.

“I also want to congratulate you on the historic nature of your nomination,” Pence said. “I never expected to be on this stage four years ago, so I know the feeling.”

Amid an intense hurricane season and devastating wildfires, Harris and Pence had a sharp exchange over climate change.

Asked if climate change was an “existential threat,” Pence avoided a direct answer.

“The climate is changing, we’ll follow the science,” Pence said, before charging that Biden would raise taxes on “every American” and ban fracking.

Harris said Biden will not ban fracking and ridiculed the Trump administration’s approach to climate change. She noted that Trump said “science doesn’t know” when pressed about the role of climate change on the wildfires in California.

“Joe understands that the West Coast of our country is burning, including my home state of California,” she said. “Joe sees what is happening in the Gulf states, which are being battered by storms. Joe has seen and talked with the farmers in Iowa, whose entire crops have been destroyed because of floods.”

An unexpected guest: A fly on Pence’s head

During the first and only vice presidential debate, a fly sat on top of Pence’s head for several minutes. The moment quickly went viral and created a stir online.

Democratic presidential nominee Joe Biden, referencing the fly, tweeted a photo of himself with a fly swatter.

“Pitch in $5 to help this campaign fly,” the tweet said. Biden several minutes later also tweeted the website, “flywillvote.com,” which redirected to a website where people can check if they’re registered to vote, as well as get information on how to vote by mail or in person.

The Biden campaign is also trying to capitalize on the viral moment by adding a fly swatter to their store, which says “Truth Over Flies.”