The NTT IndyCar Series doubleheader after the Indianapolis 500 this year was not the usual street course on Detroit’s Belle Isle, but instead a pair of 200-lap races at World Wide Technology Raceway at Gateway in Madison, Ill. © Joe Skibinski Scott Dixon got a measure of redemption and moved […]

The NTT IndyCar Series doubleheader after the Indianapolis 500 this year was not the usual street course on Detroit’s Belle Isle, but instead a pair of 200-lap races at World Wide Technology Raceway at Gateway in Madison, Ill.

© Joe Skibinski
Scott Dixon got a measure of redemption and moved closer to IndyCar title in the process.


Those races further cemented Scott Dixon’s legacy as a winner, Takuma Sato’s legacy as a hard charger and Josef Newgarden as an oval master.

Here is what you may have missed from the doubleheader weekend at Gateway’s 1.25 mile oval.

© JAMES BLACK
Alexander Rossi walks away from a first-lap crash on Saturday.

One cannot adequately describe the start of Saturday’s race without using the word cluster. And it was especially the case for Andretti Autosport.

Anticipating a green flag, Alex Palou darted inside Alexander Rossi from his row six starting position with Simon Pagenaud doing likewise from the next row. Oliver Askew followed Pagenaud as both Pagenaud and Palou quickly hit the brakes. Askew hit Pagenaud’s car, turning him into Rossi. Rossi spun and hit the inside wall on the main straight. While the back of the field was checking up, an unsighted Zach Veach plowed into Marco Andretti who then bounced into Ed Carpenter.

Two Andretti Autosport cars (Rossi and Andretti) were out almost instantly while their teammate Veach completed only two laps under caution. Carpenter completed three laps before parking his No. 20 Chevrolet.

Pagenaud turned 67 laps before he was black flagged for not meeting minimum speed. He had been lapped several times and his car never handled right after that contact.

Opinions were a bit heated after a crash before the start, especially for Rossi. The 2016 Indianapolis 500 winner has more than his fair share of bad luck this year with five finishes of 15 th or worse in the first eight races of the 2020 season.

“I was driving straight, I don’t know what you want me to say,” said Rossi. “It’s very reminiscent of a Michigan iRacing start though at the beginning of the year!”

Though Rossi was referring to the third event in the 2020 IndyCar iRacing Challenge with a bit of a laugh, it was all he could do in that situation as he was classified 22nd .

Veach became a target for Ed Carpenter’s post-race quote, saying that the Ohion “obviously didn’t see the yellow flag or the bright yellow car spinning on the track,” but Veach claimed his car just would not stop.

“For whatever reason, I couldn’t get the car stopped,” said Veach. “I got to the (brake) pedal and I pumped it—by that time I was too close to stop the car and struggled to get the brakes engaged. I hate it for the people involved, and, obviously, it makes us look a little stupid. A big thank you to my Gainbridge crew for fixing what they could so quickly and get us back out there for a shakedown. It’s frustrating. It looks bad, but I physically couldn’t have done anything else to slow the car down. For those that were involved, they understand, but from the outside, it doesn’t look as good as it is.”

After the final round of pit stops, Pato O’Ward was in a familiar place: second behind a Chip Ganassi Racing car as the laps started to count down with Scott Dixon leading. Takuma Sato was trying to become the first driver to win an Indianapolis 500 and the race following it for the first time since Juan Pablo Montoya accomplished the feat in 2000 (Indianapolis 500 and Milwaukee), but there was a problem on Sato’s final pit stop.

A problem with the right rear tire dropped the 43-year-old Sato a few seconds behind Dixon and O’Ward. The Japanese racer then drove in a flat-out charge, overtaking O’Ward around the outside in Turns 1 and 2 on Lap 180 in a move that can only be described as daring.

With only inches between both cars, Sato forced O’Ward to concede second place, but Sato was still two seconds behind the 2008 Indianapolis 500 champion.

Sato began gaining ground on the driver he beat last week at Indianapolis, getting within car lengths of Dixon’s rear wing only to lose by .1404 seconds. O’Ward finished third, seven seconds behind Dixon.

The disappointment in finishing second was very clear to all as cameras descended on the Rahal Letterman Lanigan Racing pits. Sato was frustrated, but never placed any blame anywhere.

“It sometimes happens in a race,” said Sato. “I make a mistake; there’s a mechanical failure sometimes. That pit stop was frustrating, but everybody is on the same team. The boys did a great job two weeks in a row. I’m very proud of them.”

For Dixon and his No. 9 crew, it was the 50th win in a career that will rank the New Zealander among the all-time greats in IndyCar history as he chases Mario Andretti for second on the all-time wins list.

“Sato was going to be strong at the end, but I didn’t realize how strong he was coming,” said Dixon. “We were kind of going into a reserve mode, looking after the engine, and he was there with a head of steam. Just so happy for this team. Last week at Indianapolis was a bit of a bummer. So, it was nice to get a win. Fifty—that sounds awesome. We’ve got to keep on truckin’ and get a few more. But I can’t thank Honda and HPD enough. I’m proud to be powered by them and what they’ve done, especially this year, is just phenomenal, and how quick their cars have been. This is just awesome.”

© Chris Owens 2020
After a slight delay, the Indy cars roared once again on Sunday at World Wide Technology Raceway.

The second of the two races was set to start at 2:40 p.m. CDT but the green flag was delayed by about 30 minutes.

A pre-race parade of first responder vehicles went around the track, including ambulances, fire trucks and many police vehicles. One vehicle of unknown purpose leaked fluid onto the track, which required a large cleanup effort of oil dry. While many have debated on the leak’s origin, Chris Blair, the executive vice president and general manager/promoter of the track had this to say on Twitter:

Just so everyone knows. The delay in the @IndyCar event today was due to a piece of rental equipment. @IndyCaronNBC mistakenly reported it was a ‘piece of track equipment.’ We apologize for the delay and a new equipment provider will be found in 2021.

After much debate on the merits of IndyCar’s late race yellow flag procedure, the driver that benefitted the most from last week’s late yellow ended up causing the race’s only yellow after the start of the race.

Sato hit the wall coming out of Turn 2 on Lap 197, bringing out a yellow flag with Josef Newgarden leading O’Ward and Saturday’s pole sitter Will Power.


The race never went green again, giving the Tennessee native and defending national champion his second win in the 2020 season and O’Ward his third podium of the year.

However, this race was won on pit road. Newgarden and O’Ward raced each other on pit road after their final stops on Lap 152. Newgarden barely inched by the Mexican racer and that proved to be thedifference.

“My guys have been amazing in the pits,” said Newgarden. “They have put me into position every time.

It was really fun racing Pato out of the pit. That was for the win right there, that race when we went side by side out of the pit exit. He did an amazing job. He’s going to do great things in this sport, so good job to him.”

O’Ward’s latest attempt at trying to get his first win may have fallen short, but the 2018 Indy Lights champion never stopped trying for Arrow McLaren Racing SP.

“Honestly, I was really struggling,” said O’Ward. “Whenever I got the countdown to 10 laps to go, I was pushing, pushing, pushing to get close to him and try and strike, but I just couldn’t quite do it. Today was harder than yesterday for passing. The asphalt on the track was quite a bit hotter, so that makes it quite a bit tougher with big trains of cars. We got to the back of the pack, and we kind of got stuck there.”

© Chris Owens 2020
Scott Dixon looks to be well on his way to another IndyCar championship.


Dixon Closer to Another Title?

With a fifth-place finish, Dixon’s points lead over Newgarden decreased from 117 to 96, leaving Saturday’s winner with a near-two race cushion on Newgarden after nine races. There are two races coming up at Mid-Ohio at a date yet to be announced in September and another two races in October at the Indianapolis Motor Speedway road course for the Harvest Grand Prix.

Dixon has won recently at both venues, his triumph this year at the IndyCar Grand Prix in July was his first at the IMS road course. Mid-Ohio, however, has been Dixon’s personal playground with six victories at the Lexington, Ohio circuit. Dixon is looking more and more likely to win his sixth championship, putting him one away from tying A. J. Foyt with seven.

Thu Sep 17 , 2020
Facebook Share Twitter Share The Andalusia Fire Department rescued a father and his two sons who were swept into a drainage ditch Wednesday afternoon as Hurricane Sally pummeled south Alabama. One of the sons — a teenager — was paddelboarding in the drainage ditch that runs from Walker Avenue through […] 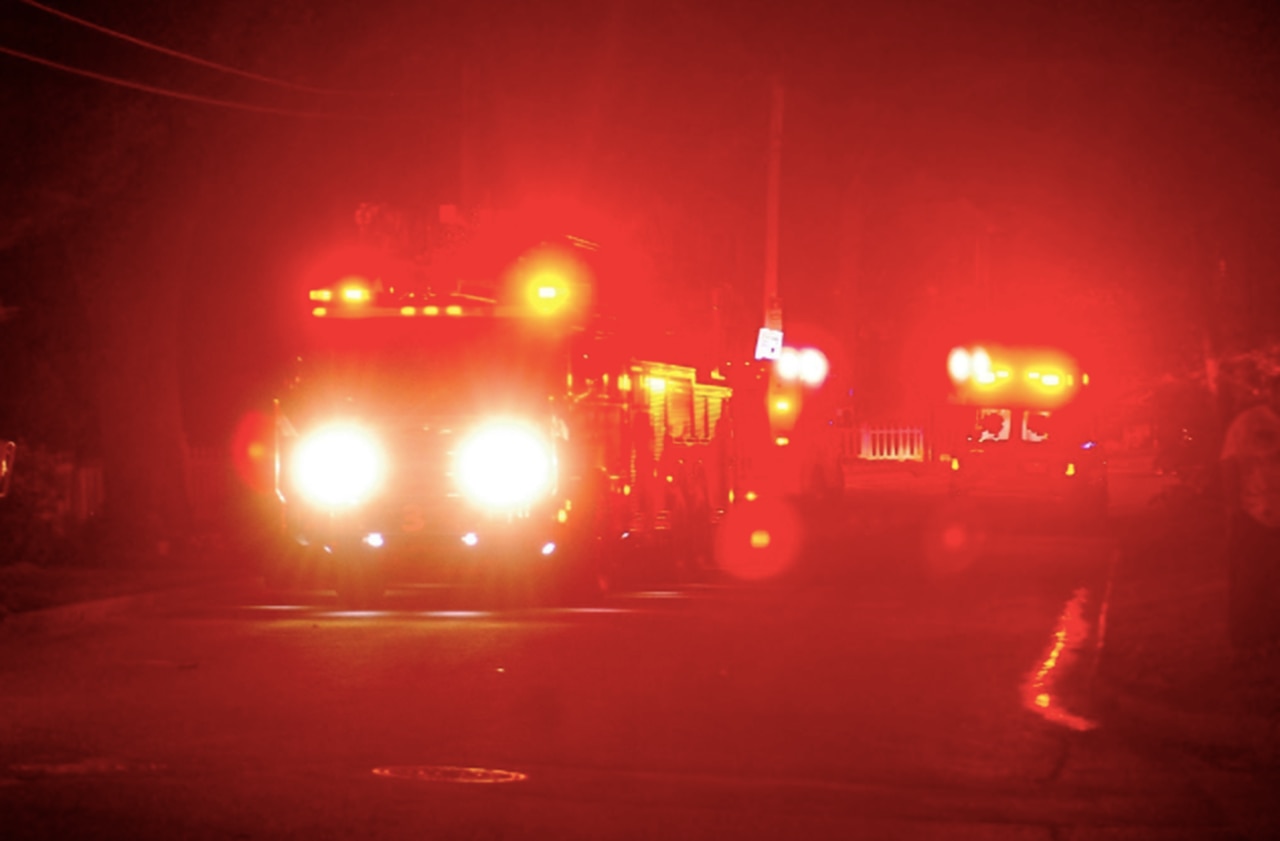