REXBURG – What mysteries are hidden inside a complex aircraft piston engine? The newest display at Legacy Flight Museum in Rexburg can give you a glimpse into the inner workings of such an engine.

Brian Peaden, a mechanic from Reno, Nevada, has created a cutaway of an 18 cylinder Bristol Centaurus engine and attached a small electric motor to spin it in slow motion. Recently, he donated it to the museum.

Peaden, a retired automotive mechanic, has found a new interest in turning aircraft engines into operating museum pieces with both the outer and internal operating systems on display.

“I just always liked engines and I built automotive engines for thirty years,” he said. “Mostly I’ve looked at other engines like this in museums and I wondered how they worked. I had questions on how things worked inside and this is the easiest way to show the operation of a complex aircraft engine.”

The Centaurus on display is an engine that had been raced in the Reno Air Races but was no longer airworthy. The precision workmanship that went into this powerful air-cooled engine is obvious, from the sheet metal cylinder shrouds to the cast aluminum engine block and all the accessories that made it go.

To make the engine display, Peaden carefully removed some parts of the engine and with grinding and polishing tools created an X-ray view.

Peaden explained that the Bristol Centaurus is an evolutionary development of World War II-era British fighter plane engines that paralleled the beginning of the jet age. The early jet engines were fuel-thirsty and of unproven reliability. Therefore, the engineers of piston engines kept pushing the envelope with larger and more sophisticated powerplants.

The Bristol Centaurus powered the Hawker Sea Fury, which is a carrier-based fighter-bomber that became operational in 1947. The website for BAE Systems, which is the successor to both Bristol and Hawker, states that the Sea Fury is the pinnacle of Hawker’s piston-engine fighter development. The Centaurus engine produced 2,480 horsepower and propelled the Sea Fury to speeds up to 460 miles per hour.

“By the time the Korean conflict broke out in June 1950, the Sea Fury was the Royal Navy’s leading single-seat fighter… In Korea, the Sea Fury saw its share of air combat against Soviet-built jet fighters with the Hawker fighter accounting for the loss of one jet in August 1952,” the website says.

“Hopefully when people see this engine spin, they can discover the ability people had to design and build complex engine systems without the aid of computers,” Peaden said.

For Peaden, it’s a labor of love to pass on what he has learned about aircraft engines and it seems to ring a responsive chord with people. The work begins by salvaging an engine with a problem and trailering it home to his shop.

“I just like doing this stuff. And if I park the trailer out in front of my house with an aircraft engine on it, people stop and say: ‘What is that thing?’”

Peaden also created the museum’s cutaway of a 28 cylinder Pratt and Whitney engine that powered such aircraft as the US Air Force C-119 Flying Boxcar.

But the Centaurus engine has a complexity all of its own with rotating sleeves inside each cylinder that control the fuel-air intake and gaseous exhaust cycles of the engine.

When the engine arrived at the museum, a small group of local aviators marveled as Peaden set the engine in operation.

“That is the most bizarre piece of monkey-motion I have ever seen,” said Craig Frisby, an aircraft mechanic at the Rexburg airport.

The museum is located at 400 Airport Road under the red hangar inside the airport and is currently open from 10 a.m. to 4 p.m. on Saturday. From Memorial Day to Labor Day the museum is open Monday through Saturday from 9 a.m. to 5 p.m. 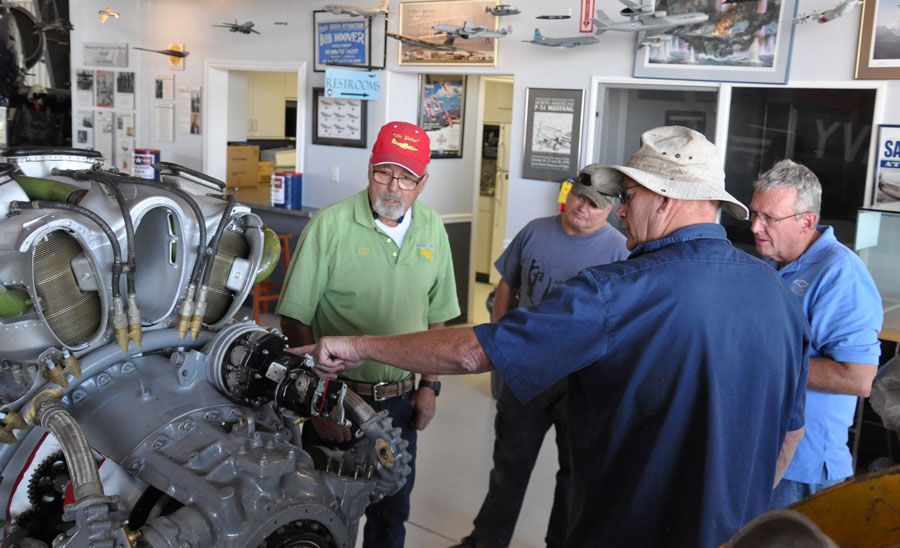