CLOSE Butler’s Pantry in Covington offers a coffee bar, sit down restaurant, outdoor patio, bakery and store with everyday items from local purveyors like milk, eggs, coffee and fresh produce. They also offer sandwiches, salads and an outdoor grill for food to grab on the go. Their full lunch menu. (Photo: […]

Butler’s Pantry in Covington offers a coffee bar, sit down restaurant, outdoor patio, bakery and store with everyday items from local purveyors like milk, eggs, coffee and fresh produce. They also offer sandwiches, salads and an outdoor grill for food to grab on the go. Their full lunch menu. (Photo: Phil Didion)

Correction: Y’all Hospitality is no longer affiliated with Boquet.

Can you imagine yourself hanging out all night at RiverCenter Covington? That’s the vision for the team in charge of its revitalization.

The newly opened Butler’s Pantry Market and Café are just the first steps in a vision for RiverCenter as the next Greater Cincinnati “destination,” akin to The Banks, Over-the-Rhine or Mainstrasse.

The reimagining of RiverCenter is being led in part by Y’all Hospitality’s Mitch Arens, a Northern Kentucky native with an “arsenal” of ideas.

Just across the hall is the Café, with an indoor and outdoor space that serves breakfast, lunch and brunch.

More: After closing due to coronavirus, Butlers Pantry in Covington now open for shoppers

When people talk about going to Mainstrasse, OTR or The Banks, Arens said he wants RiverCenter to be a part of that conversation.

They’ve got a lot to work with. Hundreds of nearby parking spots, a patio space that fits nearly 80 people socially distanced and easy access to the Riverwalk.

Next up for Arens is the reimagining of Fire, which closed in March. It was a planned closure that was sped up by the pandemic.

In Fire’s place will be Whiskey Thief, a southern and bourbon influenced restaurant with a tapas-style menu. Arens said they want to give guests a “real Kentucky experience” when they visit.

“I’ve got a pocketful of concepts I’ve been working on for 20 years. Any great chef has got an arsenal of dream concepts they’ve wanted to do,” Arens said. “It’s just finding the right ones that make sense for this space. Making sure we have enough variety and you’re not overlapping or competing too tightly with people who are around you. And just really seeing the needs.”

Arens wants an outdoor coffee cart near the Riverwalk for those who want something quick. For the lunch crowd, they want to develop a Latin street food concept similar to a Chipotle but with a more authentic menu. Then there’s the sports bar, with lots of televisions, local beers and wood-fired pizza.

It doesn’t stop there. In the future, expect to see more entertainment programming and green space.

“In order for this to be a destination, we need more than just food,” Arens said.

This summer, they planned an outdoor concert series in the parking lot across the street but COVID-19 stopped that. Arens said they plan to do the series next year.

Butler’s Pantry in Covington offers a coffee bar, sit down restaurant, outdoor patio, bakery and store with everyday items from local purveyors like milk, eggs, coffee and fresh produce. They also offer sandwiches, salads and an outdoor grill for food to grab on the go. (Photo: Phil Didion)

“I see it as a destination, I see people hanging out listening to live music, enjoying great food and I see this being a spot where you can go place to place and try different drinks and foods,” Arens said.

He said there’s a big sense of community and collaboration, with “a lot of really great people doing great things.” Arens left the city for eight years and watched it grow from a distance as he worked as a chef.

“This city changed a lot while I was gone. Being a part of the growth on the Kentucky side has been the goal since day one,” Arens said.

Butler’s Pantry is located at 50 E. Rivercenter Blvd. in Covington.

Sun Sep 20 , 2020
The sun sets behind power lines and poles in Rosemead, California (Frederic J. Brown/AFP/Getty Images) Our news is free on LAist. To make sure you get our coverage: Sign up for our daily newsletters. To support our non-profit public service journalism: Donate Now. The coming three-day holiday heat wave will […] 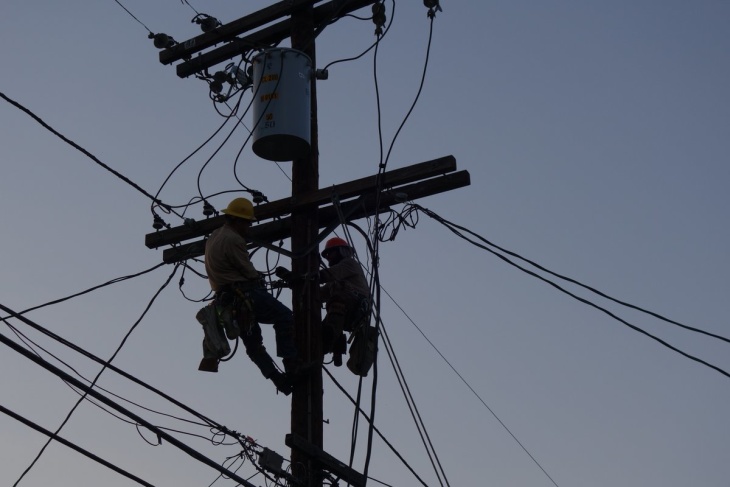